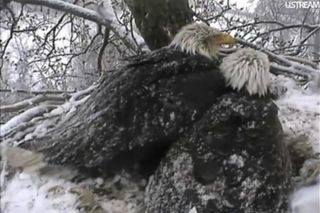 First, they dodged a tornado. Then they braced against whipping winds and pouring rain. Now the Web celebrity Decorah eagle family has survived a late spring snowstorm.

A wildly popular webcam has been focused on the eagle family in Iowa, drawing millions of viewers as the chicks hatched. The last of the three newborns hatched April 6, and their first month of life has been full of tough challenges.

Just as they did when the severe weather struck in mid-April, the three recently hatched baby eagles found shelter under their parents when the snow began to fall, and the action was caught on video.

On April 16, a late spring snowstorm coated the family's nest. Both parents stayed huddled over the eaglets to keep them warm.

On April 8, northwest Iowa was hit by several tornadoes. The tornadoes spared the eagles' nest, but the wind and thunderstorms did not. The action was caught on video as the wind nearly swept away the family. [Related: Storm Chasers Capture Iowa Twin Tornadoes on Video ]

Winter hazards aren't the only thing with which the new baby eagles are learning to cope. Even seemingly mundane tasks -- like going to the bathroom -- take some practice.