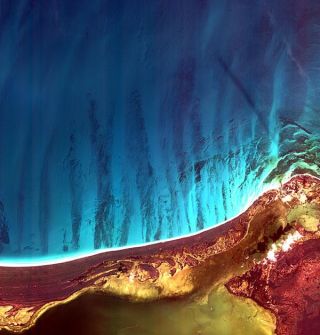 A Korean satellite has caught an eye-catching view of an island in Mexico known for a deep, rocky hole and waters so dark that they earned it the name Holbox, a name that means "black hole."

The photo was taken by the Korea Multi-purpose Satellite 2, or Kompsat-2, and shows Holbox Island and its Yalahau lagoon at the northeast corner of Mexico's Yucatan Peninsula.

Holbox Island is a 26-mile-long (42-kilometers) strip of land separated from the mainland by the lagoon.

"The freshwater lagoon has a deep rocky hole that surrounds the island, making the water appear black," officials with the European Space Agency, which is a partner in the Kompsat-2 mission, explained in a statement. "It is thought that Holbox, which in Mayan translates as 'black hole,' was named after the dark lagoon water."

Holbox Island is situated at an oceanic meeting point of sorts where the Atlantic Ocean, Gulf of Mexico and Caribbean converge. The mixing of these waters creates a nutrient-rich environment that supports an abundant array of marine life, ESA officials said. [The World's Biggest Oceans and Seas ]

At Caboe Catoche, a cape at the eastern tip of the island, the mixing of the Caribbean and Gulf of Mexico creates a veritable kaleidoscope of watery turquoise and emerald colors.

Because of its host of marine life, Holbox Island and its surrounding waters are protected as part of the Yum Balam Biosphere Reserve. The island's beaches of white coralline sand serve as a vital home for turtle nests and more than 500 species of birds, while dolphins, manta rays and several shark species swim offshore.

The region is also home to the world's largest known gathering of whale sharks the largest fish on the planet for five months of the year, ESA officials said.

The Kompsat-2 satellite has been snapping photos of Earth from orbit since it launched into space in 2006. The satellite was built for the Korea Aerospace Research Institute to provide uninterrupted Earth observation coverage following its predecessor, Kompsat-2.

ESA serves as a third-party partner in the mission and uses ground-based infrastructure to receive, process and distribute the images from Kompsat-2.