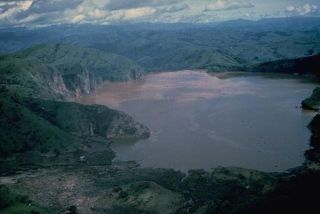 Lakes that form on and around volcanoes can spew out significant amounts of the global warming gas carbon dioxide, researchers have found.

These new findings could help scientists refine their models on how Earth's climate is changing.

It's a well-known fact that volcanic lakes could release carbon dioxide. Twenty-five years ago, a volcanic lake in Cameroon, Lake Nyos, released lethally high levels of the gas, killing 1,700 people in the surrounding area. This and other tragic incidents revealed that such lakes could be major sources of the global warming gas, which is most likely given off by magma underneath these lakes or rocks heated by such magma.

To see just how much carbon dioxide volcanic lakes as a whole might belch out, scientists randomly sampled 24 volcanic lakes in Nicaragua, Guatemala, El Salvador, Costa Rica, Japan, Cameroon, the Philippines, France and Germany with sensors floating in miniature inner tubes. They next used their findings to project how much of the gas the estimated 769 volcanic lakes worldwide belch out each year.

These new numbers from volcanic regions pale in comparison with the amount of carbon dioxide released by fossil fuel combustion annually an estimated 29.7 billion metric tons in 2007.

Nevertheless, a better understanding and quantification of the amount of gas that volcanic regions put out "is still necessary for understanding global carbon budget modeling," said study researcher Nemesio Perez, a geochemist at the Technological Institute of Renewable Energy in Spain. "And having more precise information on the global carbon cycle and its implications on the present-day atmospheric carbon dioxide budget is important for the climate models."

The scientists detailed their findings in the March issue of the journal Geology.