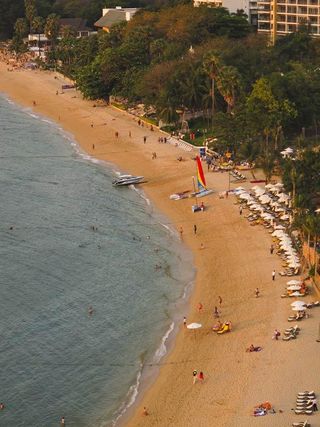 Pattaya Beach in happier times. In many places, only a narrow strip of sand remains.
(Image: © dreamstime.)

Thailand's Pattaya Beach, one of Asia's largest resort areas, is disappearing at the stunning rate of more than 6.5 feet (2 meters) per year, gobbled up by erosion caused by ocean currents and encroaching urban development.

Located on the Gulf of Thailand about 90 miles (150 kilometers) southeast of Bangkok, Pattaya Beach a destination for sun-seekers, golfers and those in search of racy nightlife could disappear in less than five years , Thai scientists are saying, according to the news service Reuters.

"If we do nothing about it, the beach will disappear in the near future you can see that (in) some areas the beach has already gone," Thanawat Jarupongsakul, a marine and coastal erosion expert at Bangkok's Chulalongkorn University, told Reuters.

"Many countries have done this," Thanawat said, adding that, in the past, authorities would have built some sort of structure to halt erosion, but an ugly addition to the beach could have many negative effects.

"If we have (the) budget, I think this project could be finished in one to two years," Thanawat said.