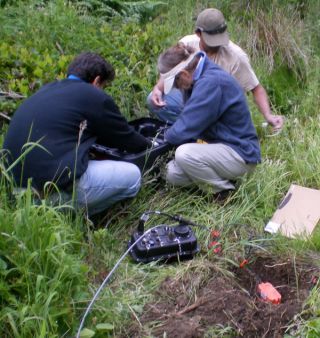 A seismic sensor (orange device) and datalogger (black box) are installed as part of one station in the
(Image: © Lisa Foley, Iris/Pascal Instrument Center)

New devices are enabling researchers from the University of Washington to learn more about the episodic tremors that occur in the northwestern United States and to determine if they are somehow related to larger earthquake events in the area.

Roughly every 15 months, an unfelt earthquake occurs in western Washington and travels northward to Canada's Vancouver Island. The event usually lasts for a month at a time , during which the energy of a magnitude 6.5 earthquake is released.

Normally, a 6.5-magnitude quake qualifies as strong on the Richter scale, and can be destructive in populated areas up to about 100 miles (160 kilometers) from the source of the temblor. But the slower quakes don't cause this damage because they release all their energy over an extended period of time.

Scientists discovered the episodic tremor a decade ago and have been trying to understand how it figures in the seismic hierarchy of the earthquake-prone Pacific Northwest .

University of Washington researchers are using new technology to get a much better picture of how these episodic tremor events might relate to potentially catastrophic earthquakes that occur every 300 to 500 years in western Washington, Oregon and British Columbia. The last of these earthquakes occurred in January 1700 and generated a tsunami that traveled as far as Japan.

In 2008, the UW researchers set up an array of 80 seismic sensors that collect the signals from tremor events. Currently there are eight such arrays, each armed with 20 to 30 sensors. Scientists have named this complex the "array of arrays." (A seismic array is defined as a set of seismographs placed to observe seismic activity and to maximize the sensitivity of each.)

"Because the signal is very different from our garden variety earthquakes, we need new techniques to determine the source of the signal, and this is one step toward that," said Abhijit Ghosh, a UW doctoral student in Earth and space sciences. "With the array of arrays we should be able to see a greater quantity of clear signal, and we do."

More recent information has found the tremor movement is far more complex. The source of the tremor generates streaks that travel 60 mph (97 kph) back and forth along a southwest-northeast track. After several hours, the bands of tremors slow down to speeds of around 6 miles (10 kilometers) per day but continue to steadily migrate north.

The arrays are producing enough data for scientists to locate the precise latitude and longitude where a signal originates, but more work must be done to determine precise depths at which the tremors occur . It could be that the signal comes from the same depth about 25 miles (40 km) as the subduction fault zone, but that is still unclear. A subduction zone is where one of Earth's tectonic plates is shoved underneath another, creating a highly seismic and volcanic environment. This particular zone is called the Cascadia fault zone (where the Juan de Fuca tectonic plate dives beneath the North American plate).

"We have already seen different types of tremor migration in Cascadia, and there might be even more," Ghosh said. "With high-precision locating technology, we are getting a clearer picture."