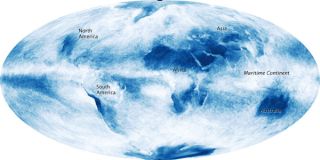 In some parts of the world the difference in the amount of clouds over land versus ocean is so stark that the outlines of continents and other landmasses can be traced through observations of clouds alone.

This image of October 2009's cloud fraction (the fraction of an area covered by clouds) demonstrates the pattern. Colors range from blue (no clouds) to white (totally cloudy).

The most dramatic cloud boundaries occur in places where very dry land is surrounded by ocean, such as northern and southern Africa, the Arabian Peninsula and Greenland.

The sharp boundary between water and land fades over humid regions. In west-central Africa, the contour of the coastline fades beneath clouds that are nearly as prevalent over the humid tropical forests as they are over the Atlantic Ocean to the west.

Over the islands, narrow peninsulas and shallow seas between Southeast Asia and Australia, the difference between land and water virtually disappears; the entire region is extremely cloudy, and the outlines of the major landmasses including the Indonesia islands of Sumatra and Borneo are barely perceptible.

In addition to their role as rain- and snow-makers, clouds often determine the energy entering and leaving the climate system. Clouds may have a warming or cooling influence depending on their altitude, type and when they form. Clouds reflect sunlight back into space, which causes cooling, and they absorb the heat that radiates from the Earth's surface.

The diversity of roles clouds can have makes daily, global observations vital to understanding and predicting Earth's climate.