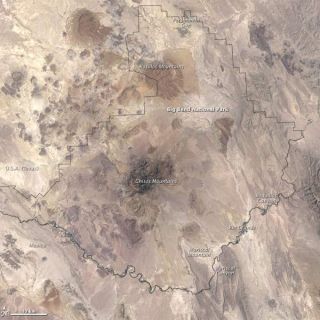 Big Bend National Park in southwestern Texas is alternatively known as a geologist's paradise and a geologist's nightmare: Sparse vegetation makes finding and observing the rocks easy, but they document a complicated geologic history extending back 500 million years.

Decades of research have enabled geologists to piece together Big Bend's complex history.

Between roughly 500 and 200 million years ago, when today's North America was part of a completely different continent , a deep ocean trough extended into the Big Bend region. Sediments washed into the trough from higher ground and over time, those sediments hardened into shale and sandstone beds.

Around 300 million years ago, a landmass collision to the south formed the ancestral Ouachita Mountains some roots of which persist today in 500 million-year-old rocks near Persimmon Gap and uplifted the area. One hundred sixty million years of erosion followed.

About 135 million years ago, the area's elevation was low enough to allow the intrusion of a warm, shallow Cretaceous Sea. Limey mud deposited by the sea later solidified into limestone, which appears throughout the park, including the walls of Boquillas Canyon.

The shallow sea began to withdraw in the direction of the Gulf of Mexico 100 million years ago. Just as limey mud left remains, so did the sandy shores of the sea, lingering as sandstone and clay sediments around the Chisos Mountains.

As the Cretaceous Period drew to a close, a new mountain chain began to rise: the Rocky Mountains. Today these mountains reach their southernmost point at Mariscal Mountain.

Around 42 million years ago, an extremely active period of volcanism began in the region.

The Chisos Mountains include the remains of ancient lava flows and ash emissions, but volcanism doesn't always produce ash clouds and lava flows. Sometimes the rock, or magma, just pushes up through overlying rock layers without quite reaching the surface. That tough, persistent rock can then be exposed by later erosion. The Rosillos Mountains are a mushroom-shaped intrusion of such volcanic rock.

Throughout its history, Big Bend has provided a home to animal species as varied as its shifting habitats. Fossils at Big Bend include oysters, snails, giant clams, ammonites, turtles, rhinos, rodents, pint-sized horses, dainty camels, and a nearly 50-foot-long crocodile.

One of the most spectacular fossils is the largest flying animal yet discovered: Quetzalcoatlus northropi. With a wingspan rivaling that of a small airplane, the giant bird probably weighed no more than a modern adult human.

Despite its current bone-dry appearance, Big Bend National Park is still home to multitude of species, including some 1,200 plant species, and hosts more kinds of cacti, birds and bats than any other U.S. national park.

The image of the park above was taken on May 10, 2002, with the Enhanced Thematic Mapper Plus on NASA's Landsat 7 satellite. A black line delineates the park perimeter, and the darker tones in the area are the volcanic features.