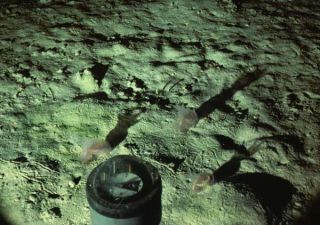 The image shows individuals of the sea cucumber Amperima rosea on the seabed of the Porcupine Abyssal Plain in the northeast atlantic.
(Image: © NOC)

An odd explosion of wormlike creatures on the ocean floor off the coast of Ireland in the late 1990s had scientists puzzled over the cause. Now research suggests it can be explained by a shift in the food trickling down to the seafloor.

Those changes in food supply were likely driven by changes in the climate back on the surface, the researchers say.

Known as the "Amperima Event," the population explosion of sea cucumbers (Amperima rosea) stunned scientists when the creatures were found blanketing a portion of the seafloor larger than the United Kingdom during the period between 1996 and 1999. Originally so rare that they were only seen in ones or twos, the animals had grown to such high densities that a person walking across the seafloor would have trouble avoiding squashing them.

"What this strongly suggested," said researcher David Billett of the National Oceanography Centre in the United Kingdom, "is that the 'Amperima Event' did not simply reflect localized, chance changes in the abundances of one or two species. Instead, changes in the whole deep-sea animal community were driven by environmental factors."

Connections between the climate at the Earth's surface and the conditions in the deep sea at depths of more than 16,000 feet (5,000 meters) were unsuspected though.

But new appreciation for a separate, major discovery in the early 1980s has lent credence to the notion that climate produces lasting changes at the deep seafloor, Billett said.

This connection between surface and seafloor came from the deaths of phytoplankton, which are tiny organisms that live off of sunlight at the water's surface and whose dead bodies, in the form of "marine snow," serve as the foundation of the food chain for deep sea animals.

Thirty years ago, the same team of scientists that studied the sea cucumber population explosion showed that seasonal changes at the water's surface caused large amounts of marine snow to fall into the ocean abyss and accumulate in a layer a few centimeters thick. Within a matter of weeks after the spring bloom of phytoplankton, the deep seafloor was covered in its own bloom of organisms that that had fed on the dead phytoplankton

Changes in nutrition may produce a more lush year for Amperima than other species, due to its requirement for certain types of phytoplankton pigments that can be increased with the marine snow bombardment. Also, Amperima is uniquely capable of producing an explosion of small eggs very quickly in response to food events, as opposed to most deep sea species, which make larger and fewer eggs, Billett said.

When combined with an appreciation for the direct impact of phytoplankton populations on the predominance of species in the abyss, it seemed possible that an increase in "marine snow" was the driving factor behind the Amperima event, researchers wrote in a statement.

The study scientists also discovered that changes on the water's surface that happen roughly every 10 years additionally impact the intensity of seasons in the abyss. Decades of monitoring organic matter at great depths through sediment trap measurements have shown that levels of dead phytoplankton at the seafloor can vary greatly between years.

"The amount of food deposited on the seafloor in one year may be 10 times more than in other years. These 'bumper years' occur infrequently and appear to be related to climate events associated with the North Atlantic Oscillation (NAO)," Billet said. The NAO is a "wobbling" of the entire climate system that happens in roughly 10-year cycles and affects the north Atlantic Ocean in much the same way that El Nino events affect the northeast Pacific.

Researchers speculate that the intensities of pressure produced by NAO in turn impact the storminess and mixing of the ocean. The mixing of nutrients affects how phytoplankton grow in the following season, which can affect other organisms and quality of phytoplankton on the seafloor.

Billett said that atmospheric pressures on the North Atlantic oceans during the wintertime seem to have a particular impact on the composition of creatures on the deep seafloor.

Though it's unclear how exactly this happens, further research will allow scientists to predict "what can happen in longer term changes, which are related to man or are related to natural cycles," Billett said.