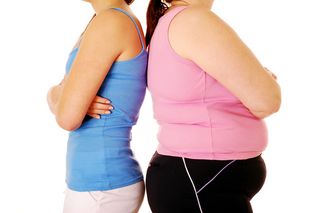 Putting on pounds might not only change your physical appearance; it could change your personality, too.
(Image: © Dreamstime)

After gaining a significant amount of weight, people may grow more self-conscious about their choices, while at the same time being weaker in the face of temptation, a new study finds.

Researchers already have an idea about how personality traits contribute to weight gain. For instance, people pleasers tend to eat more at parties, conscientious folk are more likely to have a regular exercise routine, and those with a Type A personality may be at increased risk for health problems like weight gain and heart disease. These are all averages, of course, and every person with a certain personality won't fall into the associated health group.

"What we don't know is whether significant changes in weight are associated with changes in our core personality traits," Angelina Sutin of the Florida State University College of Medicine said in a statement. "Weight can be such an emotional issue, we thought that weight gain may lead to long-term changes in psychological functioning." [The 7 Biggest Diet Myths Debunked]

Sutin and her colleagues at the National Institutes of Health (NIH) looked at data on the personality traits and weights of more than 1,900 people at two time points, nearly a decade apart.

During that period, those who gained more than 10 percent of their body weight became more impulsive and were more likely to give in to temptations compared with those whose weight remained stable, the researchers found.

At the same time, weight gain was also associated with increased thoughtfulness in decision making. These results held regardless of how much participants weighed, specifically their body mass index (BMI, or a measure of body fatness) at the beginning of the study.

The researchers speculate that people who have put on pounds might feel more self-conscious about their actions because of negative comments they've received about their weight. But they may still have trouble keeping temptations at bay even as they become more aware of their choices, and those effects can snowball, the researchers say.

"The inability to control cravings may reinforce a vicious cycle that weakens the self-control muscle," the researchers wrote on April 29 in the journal Psychological Science. "Yielding to temptation today may reduce the ability to resist cravings tomorrow. Thus, individuals who gain weight may have increased risk for additional weight gain through changes in their personality."