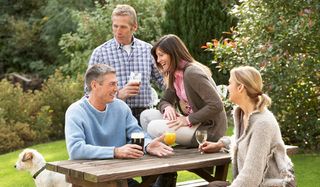 People who strive to keep other people happy may eat too much in social situations, a new study says.

In the study, people-pleasers were more likely to try to match the eating of their peers, and ate more to make others feel comfortable, compared with people less bent on making others happy.

"People-pleasers feel more intense pressure to eat when they believe that their eating will help another person feel more comfortable," said study researcher Julie Exline, a psychologist at Case Western Reserve Universtiy in Cleveland. "Almost everyone has been in a situation in which they've felt this pressure, but people-pleasers seem especially sensitive to it," Exline said.

The study involved about 100 college students who completed a questionnaire that assessed characteristics of people-pleasing, a personality trait also known as "sociotropy." Students who scored high in people-pleasing were those who said they tended to put others' needs before their own, worried about hurting others, and were sensitive to criticism, among other behaviors.

After completing the questionnaire, the students were seated with a female actor who posed as a participant in the study. The experimenter handed a bowl of M&M candies to the actor, who took a small handful of candies (about 5) before offering the bowl to the participant. After taking the candies, participants reported how many they took and why. Researchers also assessed the number of candies taken.

Participants with high sociotropy (people-pleasing) scores took more candy, both in the laboratory experiment and in a second study involving recall of real-life eating situations.

People-pleasing people were also more likely to say their decision to take candy was based on an attempt to make their peer feel comfortable.

This study looked at the eating habits, but, Exline said, the same behaviors that affect food consumption can also affect other areas of a person's life. For example, people-pleasers may feel anxious or guilty if they outperform others in areas such as academics, athletics or relationship success. People-pleasers have a strong desire to avoid posing a threat to others, so they often put a lot of energy into trying to keep others comfortable, Exline said.

Pass it on: People-pleasers may overeat in social situations.