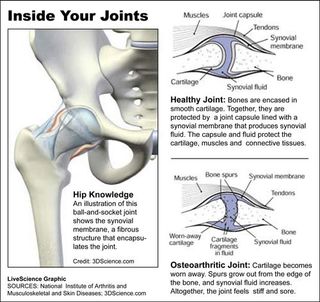 A graphic shows what's inside your joints, and what can go wrong.

As we all know, arthritis, the leading cause of disability among people over 55, causes pain. But new research suggests that pain also causes arthritis.

Pain should no longer be thought of just as a symptom of arthritis, according to the study in the October issue of the journal Arthritis and Rheumatism. Pain signals originating in arthritic joints, and the biochemical processing of those signals as they reach the spinal cord, worsen and expand arthritis, the researchers say.

In addition, the researchers found that nerve pathways carrying pain signals transfer inflammation from arthritic joints to the spine and back again, causing disease at both ends.

Technically, pain is a patient's conscious realization of discomfort. Before that can happen, however, information must be carried along nerve cell pathways from, say, an injured knee to the pain processing centers in dorsal horns of the spinal cord, a process called nociception. The current study provides strong evidence that two-way, nociceptive "crosstalk" may first enable joint arthritis to transmit inflammation into the spinal cord and brain, and then to spread through the central nervous system (CNS) from one joint to another.

Furthermore, if joint arthritis can cause neuro-inflammation, it could have a role in conditions like Alzheimer's disease, dementia and multiple sclerosis.

Armed with the results, researchers have identified likely drug targets that could interfere with key inflammatory receptors on sensory nerve cells as a new way to treat osteoarthritis (OA), which destroys joint cartilage.

The most common form of arthritis, osteoarthritis eventually brings deformity and severe pain as patients loose the protective cushion between bones in weight-bearing joints like knees and hips. About 27 million Americans have osteoarthritis and 1.3 million have rheumatoid arthritis, according to the Arthritis Foundation.

"Until relatively recently, osteoarthritis was believed to be due solely to wear and tear, and inevitable part of aging," said Stephanos Kyrkanides, associate professor of Dentistry at the University of Rochester Medical Center.

"Recent studies have revealed, however, that specific biochemical changes contribute to the disease, changes that might be reversed by precision-designed drugs," he said. "Our study provides the first solid proof that some of those changes are related to pain processing, and suggests the mechanisms behind the effect," said Kyrkanides, whose work on genetics in dentistry led to broader applications.

The common ground between arthritis and dentistry: The jaw joint is a common site of arthritic pain.

How the pain signal works

Past studies have shown that specific nerve pathways along which pain signals travel repeatedly become more sensitive to pain signals with each use. This may be a part of ancient survival skill (if that hurt once, don't do it again). Secondly, pain has long been associated with inflammation (swelling and fever).

In fact, past research has shown that the same chemicals that cause inflammation also cause the sensation of pain and hyper-sensitivity to pain if injected. Kyrkanides' work centers around one such pro-inflammatory, signaling chemical called Interleukin 1-beta (IL-1beta), which helps to ramp up the body's attack on an infection.

Specifically, Kyrkanides' team genetically engineered a mouse where they could turn up on command the production of IL-1beta in the jaw joint, a common site of arthritis.

Experiments showed for the first time that turning up IL-1beta in a peripheral joint caused higher levels of IL-1beta to be produced in the dorsal horns of the spinal cord as well.

Past studies had shown astrocytes, non-nerve cells (glia) in the central nervous system that provide support for the spinal cord and brain, also serve as the immune cells of CNS organs. Among other things, they release chemicals like IL-1beta to fight disease when triggered. The same chemicals released from CNS glia may also be released from neurons in joints, possibly explaining how crosstalk carries pain, inflammation and hyper-sensitivity back and forth.

In both mouse models, experimental techniques that shut down IL-1beta signaling reversed the crosstalk effects. Specifically, researchers used a molecule, IL-1RA, known to inhibit the ability of IL-1beta to link up with its receptors on nerve cells.

Existing drugs (e.g. anakinra, which is indicated for rheumatoid arthritis) act like IL-1RA to block the ability IL-1beta to send a pain signal through its specific nerve cell receptor, Kyrkanides said, and his group is exploring a new use for the drugs as an osteoarthritis treatment.

The implications of this process go further, however, because the cells surrounding sensory nerve cell pathways too can be affected by crosstalk. If 10 astrocytes secrete IL-1beta in response to a pain impulse, Kyrkanides said, perhaps 1,000 adjacent cells will be affected, greatly expanding the field of inflammation.

Spinal cord astrocytes are surrounded by sensory nerve cells that connect to other areas of the periphery, further expanding the effect. According to Kyrkanides' model, increased inflammation in the central nervous system can then send signals back down the nerve pathways to the joints, causing the release of inflammatory factors there.

Kyrkanides' colleagues for this research included M. Kerry O'Banion, Ross Tallents, J. Edward Puzas, Sabine M. Brouxhon, Paolo Fiorentino, all at the University of Rochester School of Medicine and Dentistry. This work was supported in part by grants from the National Institutes of Health.