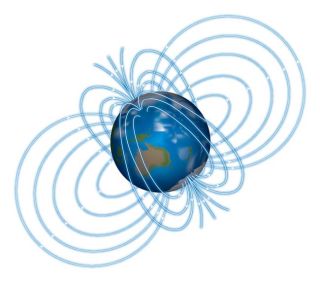 Every so often, Earth's magnetic field flips on its head, turning the magnetic North Pole into the South Pole and vice versa.

It last happened 780,000 years ago, and is predicted to occur again in about 1,500 years ... maybe. The overall frequency is hard to predict — there was one period in Earth's history when the field didn't reverse for 30 million years.

Why these flip-flops happen at all is a great riddle, but a new hypothesis on the origins of the magnetic field could shed light on the reason.

Earth's magnetic field is really two fields with two separate sources, argues paleomagnetist Kenneth Hoffman of California Polytechnic State University in San Luis Obispo and geochronologist Brad Singer of the University of Wisconsin, Madison, in a paper published in the Sept. 26 issue of the journal Science.

One component of the field, the stronger part, is the north-south pointing "axial dipole" magnetic field, which can be pictured as the kind of field that would be created by a giant bar magnet inside the Earth.

There is also a weaker field spread around the planet, not positioned along the north-south axis. The researchers suggest this weak field is created closer to the surface of Earth's outer core, while the stronger north-south field is produced throughout the core, including the deepest parts.

Both fields are thought to result from the movement of electrons from hot iron atoms in the convective flow of the core, which is more of a liquid than a solid. The movement of the charged particles through the planet creates a magnetic field just as the movement of an electric current through a wire does.

"The field is not always stable, the convection and the nature of the flow changes, and it can cause the dipole that’s generated to wax and wane in intensity and strength," Singer said. "When it becomes very weak, it's less capable of reaching to the surface of the Earth, and what you start to see emerge is this non-axial dipole, the weaker part of the field that's left over."

How can they know that?

To figure this out, Hoffman and Singer analyzed remnants of lava that poured out of volcanoes in Tahiti and Germany between 500,000 and 700,000 years ago. The lava contains an iron-rich mineral called magnetite. When the hot lava is erupted, the iron atoms' electrons spin in random directions, but as it cools down the electron spins freeze pointing in the direction of the planet's magnetic field lines.

At times when the Earth's magnetic dipole field was strong, the spins in both Tahiti and Germany pointed toward the magnetic North Pole. However, when the dipole field was weakening or preparing to reverse, the spins were left to be guided by the strongest nearby magnetic field lines from the weaker field that was left over, which were different in Germany compared to Tahiti.

The finding shows that when the main element of Earth's magnetic field is weak, smaller local magnetic pulls kick in. By studying where these local pulls are strongest, the researchers can map out this second layer of field and learn how it differs from the stronger field.

Ultimately, scientists hope to have a better handle on these issues by the time our planet's field flips again.

"The magnetic field is one of the most fundamental features of the Earth," Singer told LiveScience. "But it's still one of the biggest enigmas in science. Why [the flip] happens is something people have been chasing for more than a hundred years."

When the next reversal comes, it probably won't inflict much damage to life on Earth, Singer said. Though we could expect a slight increase in damaging cosmic radiation, which is usually repelled by the magnetic field, it shouldn't be enough to cause serious harm. And though magnetic north and south poles will switch spots, the seasons and other cycles on the planet are primarily due to Earth's position relative to the sun, which wouldn't change significantly. All in all, the flip is nothing that our planet hasn't faced many times before.

"The magnetic field has reversed itself hundreds, if not thousands, of times," Singer said. "Right now, the axial dipole is waning in strength, so we might experience a field reversal in the next two millennia if it continues to weaken at the current rate."