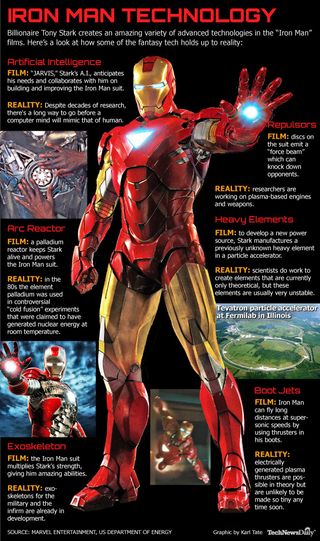 Iron Man may be a high flying fictional super hero, but some of his inventions are grounded in reality.
(Image: © Karl Tate, TechNewsDaily; SOURCES: Marvel Entertainment and U.S. Department of Energy)

Matt Shipman is a science writer and public information officer at NC State. He writes the blogs The Abstract and Communication Breakdown , and contributed this article to LiveScience's Expert Voices: Op-Ed & Insights.

Iron Man 3 isn't out yet, but the first two movies (and decades of Iron Man comics) raise some interesting questions about how scientists and engineers create and utilize new materials — like the energy source for Iron Man's suit.

For those who have been shut off from pop culture, here's a recap of the first two Iron Man movies: Billionaire inventor Tony Stark creates a powered exoskeleton that gives him de facto superpowers. The suit is initially powered by the fictional arc reactor, which runs on palladium. But in Iron Man 2, Stark creates a mysterious new element to power the suit. (Vibranium?).

Stark develops this mystery element through an accelerated process in which he uses a variety of techniques to create and test the new material so quickly that he's using it in his suit in less than a year.

"In the real world, it can take 20 to 30 years to move a new material from discovery to application," said Suveen Mathaudhu, a program manager in the materials science division of the U.S. Army Research Office, adjunct materials science professor at NC State and hardcore comics fan.

"To solve society's problems, we need to find a way to do this more quickly, and we are," Mathaudhu said. "The materials science community is implementing systems much like Stark's."

And Mathaudhu has really thought about this — he is co-curator of an exhibit called "COMIC-Tanium: the Super Materials of the Super Heroes," which is sponsored by the TMS Foundation and opens this summer at the Toonseum in Pittsburgh.

"For example, to create the new element, Stark has to visualize it in three dimensions," Mathaudhu said. "But conventional technology usually only provides images in two dimensions. Over the past few years, materials researchers have been able to use technologies — like atom probe tomography — to give us 3D images of materials at the atomic scale."

These 3D images give scientists a deeper understanding of a material's nanostructure, which, in turn, gives them insight into how those structures relate to a material's properties. In a sense, it's Materials Science 101.

Historically, the process of investigating these areas — which can take decades — didn't begin until after a new material was discovered. But that's changing. And Iron Man offers a great example. [You, Too, Can Be Iron Man ... Almost]

"In Iron Man 2, Stark begins the process of creating his new element by defining the performance characteristics he's looking for," Mathaudhu said. "He then searches for the atomic structure that would give a material the necessary properties. The last thing he does is synthesize the new material."

That sort of reverse engineering is the new model for materials research. For example, a few years ago, the U.S. Department of Defense (DOD) was searching for a material that could be used in a new type of landing gear. Materials scientists used the specific characteristics that the DOD was looking for to reverse engineer a new iron alloy from scratch.

This approach is getting support from high places. In June 2011, the White House Office of Science and Technology Policy launched the Materials Genome Initiative, with the stated goal of doubling the speed "with which we discover, develop and manufacture new materials." How do they want to do it? By pursuing Tony Stark's paradigm of identifying what sort of material you want, and then figuring out how to make it.

"We're a long way from creating a replicator, à la Star Trek, but reality is moving much closer to the realm of comics and science fiction," Mathaudhu said.