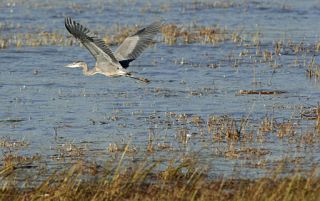 A bird flies over wetland in Clay Township, Mich., in this 2003 file photo. Just a few miles north of one of the nation's largest metropolitan areas lies an oasis of marsh and prairie home to a variety of endangered and protected species found few other places in North America. The St. Clair Flats, one of the largest freshwater deltas in North America, is made up of over 80 square miles of United States and Canadian lands and waters in the northeast corner ofLake St. Clair. AP Photo/Paul Sancya

Marshes pass a lot of gas, which adds to the whole global warming problem. One solution: Let them flood, a new study suggests.

The idea is pretty simple. Both nature and humans create greenhouse gases. Humans do it when they burn carbon-based stuff. One aspect to nature's contribution involves bacteria in wetlands that produce methane while munching on organic meals. Methane is the major component of natural gas, and it's also a greenhouse gas that acts like a blanket to keep solar radiation trapped inside the atmosphere.

Wetlands can be thought of as the kidneys of the environment, absorbing chemicals and gunk and organic matter, explains a team led by William Mitsch of Ohio State University. Nature likes to flush its kidneys, either with floods, tides or occasional catastrophic storms such as hurricanes. We humans sometimes work to prevent all that with levees, sea walls, dams and floodgates, but that means the kidneys can get a little backed up. When that happens, more methane is released from the deep water in a wetlands area, the researchers found.

In tests, pulsing water through wetlands cut down on methane emissions.

"Our point is that the healthiest systems and the ones with the lowest emissions of greenhouse gases are those that have these pulses and that are able to adapt to the pulses," Mitsch said.

The research, announced this week, was published in a recent issue of the journal Wetlands.

The study examined methane emissions over a two-year period. The researchers created two different kinds of conditions in two 2.5-acre experimental wetlands. In 2004, they used pumps to deliver monthly pulses to create conditions in the wetlands resembling natural marshes flooded with river water. In 2005, they pumped roughly the same amount of water but maintained a more artificial, constant flow with no pulses.

"If there is less methane emission it means that either more carbon is stored in the peat, or the methane is 'oxidized' as it passes through the water to carbon dioxide, or it is pulsed out of the system," Mitsch told LiveScience in an email interview. "Since an 'outflow' of a wetland will usually go to an oxygenated flowing stream, the carbon then is metabolized aerobically and is emitted as carbon dioxide there."

So why is this better? "Carbon dioxide is 22 times less a problem as a greenhouse gas than is methane," he said.

The scientists aren't suggesting any major projects to create pulses in existing systems. Rather, Mitsch said, we'd be wise to leave existing natural setups as they are.

"We build dams to minimize pulses and manage rivers to stay in their channels," he said. "Nature does not 'like' even or predictable flows; only humans do. Nature is smarter than we are in managing its gases."