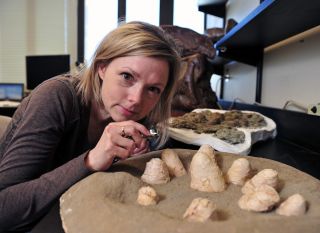 Dinosaurs laid eggs, of that there is no doubt. But what scientists haven't been as clear on is whether they brooded over their eggs like birds or buried them like crocodiles.

Now, a new study finds that at least one dino took a birdlike approach to hatching eggs. Troodon was a small, meat-eating dinosaur that grew to be about 8 feet (2.4 meters) long. The dinosaurs date back to the Late Cretaceous, about 75 million years ago, and they apparently incubated their eggs much like modern birds.

Most birds sit on their eggs to warm them, but crocodiles and their relatives completely bury their nests. The difference between the two shows up in the eggshells: Croc eggs have many pores to allow for air and water exchange, lest the eggs suffocate in their closed, humid nests. Bird eggs exposed to the air have fewer pores, because their eggs would be more in danger of drying out. [Image Gallery: Dinosaur Daycare]

University of Calgary dinosaur researcher Darla Zelenitsky and Montana State University paleontologist David Varricchio studied Troodon egg clutches from Canada and Montana, examining the fossilized shells for signs of burial. They compared the porosity of the eggshells with that of eggshells from modern-day crocodiles, birds that nest by burying their eggs in mounds, and birds that nest by brooding, or sitting on their eggs.

They found that porosity varied across the dino eggshell, suggesting the dinosaur laid its eggs almost vertically in sand or mud, but didn't bury the eggs completely. The adult would have had direct contact with the upper portions of these partially buried eggs, Varricchio said.

"There are similarities with a peculiar nester among birds called the Egyptian plover that broods its eggs while they're partially buried in sandy substrate of the nest," Varricchio said in a statement.

The plover, a wading bird, nests by laying its eggs in warm sand and then sitting on the nest with a wet belly, cooling the eggs from above.

The findings demonstrate that birdlike behavior evolved in theropods, the caste of bipedal dinosaurs related to today's birds, Zelenitsky said in a statement. The researchers reported their findings in the spring issue of the journal Paleobiology.