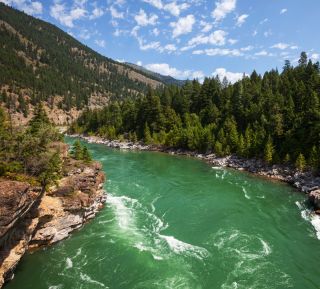 The environmental group American Rivers has released its annual list of the 10 most endangered rivers in the United States, with the Colorado River topping the list. The river is threatened by outdated water-management techniques that allow an unsustainable amount of water to be taken out of the river basin, the group said.

As a result, the mighty Colorado, which carved the Grand Canyon, dries up long before it comes close to the ocean.

"This year's [report] underscores the problems that arise for communities and the environment when we drain too much water out of rivers," Bob Irvin, president of American Rivers, said in a statement. [10 Most Endangered US Rivers]

About 36 million people depend on the Colorado River for their drinking water. The river also irrigates 4 million acres of land, where 15 percent of the country's crops are grown, according to the release.

The overdrawing of water and the severe recent drought, are stressing the river and causing it to run at lower levels — which, in turn, threatens endangered fish and wildlife, as well as the river's $26 billion recreation economy, according to the group.

Outdated water management, which results in lower water levels in rivers, is one of the biggest problems facing U.S. waterways, according to American Rivers. But pollution from coal plants and mining activities also represent a significant threat. The group notes that copper and nickel mining, for example, threaten Minnesota's Boundary Waters Canoe Area Wilderness (which ranks No. 6 on the list), the most visited wilderness area in the country, according to American Rivers. Mining is the primary threat facing four of the 10 rivers on the list.

Pollution from coal ash is the reason why the Catawba River is on the list (in the No. 5 spot). The river, which supplies millions in the Southeast with drinking water, is threatened by pollution release from large ponds that store coal ash, a byproduct of power generation.

Here is American Rivers' list of the 10 most endangered U.S. rivers:

To alleviate the problems facing these rivers, the group has called on various levels of government to put policies in place and, in some cases, enforce existing laws to better safeguard drinking water and pristine areas.

"American Rivers and its partners urge Congress to immediately follow the Bureau of Reclamation's recent study with bold action and funding to build a future that includes healthy rivers, state-of-the-art water conservation for cities and agriculture, and water-sharing mechanisms that allow communities to adapt to warmer temperatures and more erratic precipitation," the group said in a statement.