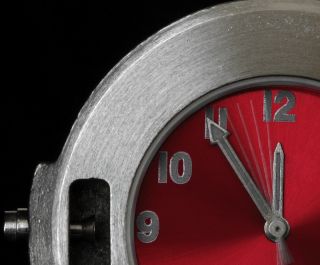 The Bulletin of the Atomic Scientists has reset the "Doomsday Clock" to 5 minutes before midnight, a minute closer to humanity's imminent destruction, symbolized by "midnight," than last year.
(Image: © T.W., Shutterstock)

The artist who drew the original "Doomsday clock" has died, with the hands on the clock set at 11:55 p.m.

According to the New York Times, Martyl Langsdorf, 96, died on March 26, just a few months after the board of the Bulletin of the Atomic Scientists set the metaphorical clock at 11:55 p.m., symbolizing the threat of humanity's destruction from nuclear weapons, climate change and other manmade disasters.

The clock has been a potent symbol of mankind's capacity to threaten itself, but the original artist is less known. Langsdorf, an abstract painter, was married to a physicist who worked on the Manhattan Project to develop the atomic bomb. The same scientists who developed the bomb later banded together to form the Bulletin to deal with the dangers of what they'd created. Langsdorf designed the first Bulletin cover in 1947, depicting the now-famous Doomsday clock set at 11:53 p.m. The most optimistic the clock has ever been was in 1991, when the Bulletin, cheered by the end of the Cold War, set the hands to 11:43 p.m.