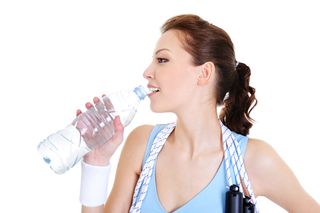 Exercise that involves vertical movements like jumping rope may fight feelings of hunger better than other forms of exercise, a new study from Japan suggests.

Studies have shown that exercise suppresses appetite for a short period, and research has suggested that appetite-regulating hormones released by the gut are involved in this effect.

The authors of the new study wondered if the "gut disturbance" that happens during exercise that moves the center of mass up and down would change levels of hormones like ghrelin, which is released when we're hungry, more than other types of exercise.

To test their idea, the researchers looked at 15 healthy men whose average age was 24. On separate days, the men either skipped rope for 30 minutes or rode a stationary bicycle, or rested. The researchers adjusted the cycling sessions so the amount of energy each man expended while cycling matched the energy he burned while jumping rope.

At several points during and after the exercise, the researchers measured levels of appetite hormones, and asked the men how hungry they felt, along with how much they wanted to eat salty, sweet, sour and fatty foods.

Results showed that the men reported feeling less hungry during both the cycling and the rope skipping,  compared with the control, resting sessions. This feeling of less hunger continued until 15 minutes after they stopped exercising.

In addition, the men reported feeling less hungry when they were jumping rope, compared with when they were cycling, at 25 minutes into the exercise sessions.

Moreover, the researchers found a similar trend in the men's desire to eat fatty foods — the men reported less craving for fatty foods while they were exercising, and this was more pronounced during the rope-jumping session.

And further, after the cycling session was over, the men rated themselves as hungrier than they did after the control trials, but after the rope-skipping sessions, they did not. This suggests that cycling, but not jumping rope, causes hunger that leads to "compensating" for the energy that was burned, the researchers said.

However, the gut hormone levels were not different after the cycling sessions compared with the rope-jumping sessions. It may be that some other mechanism explains the difference in hunger levels, the researchers said.

"Taken together, our results suggest that aerobic exercise, particularly rope-skipping exercise, may regulate the desire to eat fatty foods, and thus improve dietary behavior regarding fatty foods in adults," they said.

Barry Braun, associate professor and director of the energy metabolism laboratory at the University of Massachusetts, said that the study was well-designed in that the researchers matched the energy expended between the rope-skipping versus cycling conditions.

However, there were only "very small differences" in hunger between the two exercise protocols, Braun said.

"It is possible that more vertical motion leads to more gut distress (although that was not measured) and that resulted in less hunger during the exercise itself, but the effect is subtle," he wrote in an email. Rather than gut hormones, the small decrease in hunger seen in the study could also have been due to larger rise in body temperature during the rope-skipping, he said.

The study presents "an interesting idea, from an 'I wonder why?' perspective," Braun said.

The new study was published online Feb. 10 in the journal Appetite.

Pass it on: Jumping up and down may help you fight hunger.