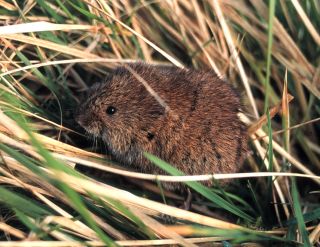 The fate of a major European ecosystem depends on populations of a tiny, mouse-like creature: the vole.

Herbivorous voles play a critical role in the food chain. They are prey for many predators and important consumers of vegetation. Historically, voles have had three- to five-year boom-and-bust population cycles. However, over the past half-century, these cycles have been much less pronounced, a new study finds. The widespread flattening of vole populations may be due to climate change, and it could have detrimental effects on species that rely on these little creatures.

Voles are close to the bottom of the food chain, and the fate of these animals tends to have a ripple effect on the rest of the ecosystem, said ecologist Xavier Lambin of the University of Aberdeen in the U.K., and senior author of the study published today (April 4) in the journal Science.

In a typical boom year, a grassy area the size of a football field could be home to more than 500 voles. In a bust year, however, that number might dwindle to just a handful. This fluctuation in the populations of these little creatures acts as a kind of pacemaker for the ecosystem that depends on them. [In Photos: Adorable Voles]

Lambin and his colleagues analyzed vole-population data gathered over the past 60 years from areas across Europe. They found that over the last 20 years, there has been a gradual change in the population cycles, leading to smaller peaks in vole populations. Without this pacemaker in the ecosystem, "the strength of the heart beat is much, much weaker than it used to be," Lambin told LiveScience.

The shrinking of population booms will have a profound effect on vole predators, such as owls, kestrels, weasels and foxes, Lambin said.

"Many species are in deep trouble ― some species are completely unable to breed unless you have a vole outbreak," he said. The Arctic fox, in Sweden, for example, can have up to 14 pups per litter in a vole peak year but nothing in between — so a smaller peak might mean few to no pups, Lambin said.

So what's causing the vole-population peaks to diminish? Both local and global factors could be at play, but the one consistent change across Europe has been less population growth during the winter. The best candidate for such a widespread effect is climate change, Lambin said.

"It's a bit of a warning shot," Lambin said. "The way the natural world responds to changes in the environment can be quite unpredictable."