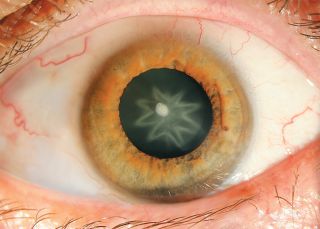 A man in Austria developed a cataract shaped like a star in his eye after he was punched, according to a report of his case.

The 55-year-old went to his doctor because his vision in that eye had progressively worsened over the previous six months, according to doctors who treated the man.

The patient said he'd been punched nine months earlier, the doctors wrote in their report.

"Nature has made a beautiful cataract," said Dr. Mark Fromer, an ophthalmologist at Lenox Hill Hospital in New York City, and eye surgeon for the New York Rangers hockey team, after he saw the image. "Most aren't so pretty," he said.

It's very common for cataracts to form after the eye takes a hit, Fromer said. Punches and the balls used in sports are most often the cause, but bumps from air bags and steering wheels have also created cataracts, Fromer said.

When the eyeball is struck, the energy of the blow sends shock waves through the eye that can disrupt the nature of the eye's lens, causing it to become opaque in regions, he explained. In most cases, cataracts look more like a vaguely shaped cloud, and can be white or yellowish.

The man in Austria was treated with a procedure called "phacoemulsification," which involves using sound waves to break up the opaque part of the lens, and then removing it with a vacuum. The lens is then replaced with an artificial lens, Fromer said. In fact, such cataract surgery is the most widely performed surgery in the world, with 2 million procedures done in the U.S. yearly.

Trauma to the eye is one reason why doctors emphasize the importance of wearing protective eyewear during sports, Fromer said.

Pass it on: A man developed a star-shaped cataract after he was punched.