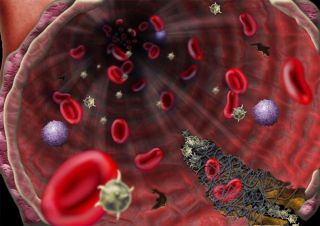 A blood type that can turn blood transfusions deadly has proven a perplexing mystery for 60 years. Now researchers have finally identified the secret behind the blood type known as "Vel," findings that could help make blood safer for hundreds of thousands of people worldwide.

The mystery began in 1952, when a 66-year-old woman in New York, sick with colon cancer, received a blood transfusion and unexpectedly suffered from a severe and potentially fatal rejection of the blood. Investigators referred to her, using her last name, simply as Patient Vel.

Further research found that Mrs. Vel had developed a potent immune response against some unknown compound found on the red blood cells she had received. However, scientists could not identify this compound, opening the mystery of a new blood type, "Vel-negative."

"The molecular basis of the Vel-negative blood type remained elusive for more than 60 years despite intense efforts worldwide," researcher Bryan Ballif, a biochemist and mass spectrometrist at the University of Vermont, told LiveScience. [The 9 Most Bizarre Medical Conditions ]

Most people in the world are Vel-positive, but soon investigators discovered that Mrs. Vel was not alone; more than 200,000 people in Europe and more than 100,000 in North America share the Vel-negative blood type. For the 1 in 2,500 people of European descent with the rare blood, receiving a Vel-positive transfusion can easily result in kidney failure and death.

Everyone's red blood cells are coated with molecules that can serve as what are called antigens, compounds that prompt the immune system to respond. It does so by pumping out proteins known as antibodies that latch onto and neutralize those antigens. However, people do not normally produce antibodies to their own red blood cell antigens, only to foreign ones — such as when they receive blood from another person who has a different blood type, and therefore an antigen they lack.

The most commonly known blood antigens make up the major human blood groups: A, B, AB and O. However, many less-common blood groups also exist, such as Vel, which can potentially make transfusions dangerous for patients.

Vel-negative blood is one of the most difficult blood types to supply in many countries. This is partly due to its rarity, but also to the dearth of any systematic way to screen for Vel-negative blood from donors. Previously, to identify whether someone was Vel-negative or Vel-positive, doctors had to use antibodies generated by the few known Vel-negative people after their bodies had rejected transfused blood. Many hospitals and blood banks lack access to these antibodies and thus any way to test for Vel.

Now Ballif, along with molecular biologist Lionel Arnaud of the French National Institute of Blood Transfusion and their colleagues have found the mysterious culprit behind Vel.

"Our findings promise to provide immediate assistance to health care professionals should they encounter this rare but vexing blood type," Ballif said.

To find the missing piece, the international team used antibodies from Vel-negative patients to purify the Vel protein from human red blood cell membranes. Ballif and his colleagues then identified the culprit, a tiny molecule researchers had never before observed, andwhich is now dubbed small integral membrane protein 1, or SMIM1. Genetic analysis of 70 Vel-negative people revealed that each such patient was missing a short gene that instructs cells how to make SMIM1. [7 Biggest Mysteries of the Human Body]

Last year, the same researchers identified the proteins responsible for two other rare blood types, Junior and Langeris. With Vel, the global count of understood blood types now rises to 33.

"While there are still a couple of rare blood types whose molecular basis remains to be elucidated, the Vel-negative blood type was surely the most vexing mystery," Arnaud told LiveScience.

The researchers developed DNA-based tests for identifying Vel-negative patients.  These tests can easily be integrated into existing blood testing procedures and clinicians can complete them in two hours or less, the researchers said.

"For those rare Vel-negative individuals in need of a blood transfusion, this is a potentially life-saving time frame," Ballif said. "Even if you are that rare one person out of 2,500 that is Vel-negative, we now know how to rapidly type your blood and find blood for you."

The scientists detailed their findings online March 18 in the journal EMBO Molecular Medicine.