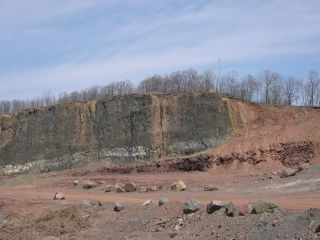 In Clifton, New Jersey, a massive lava flow (black rock on left) from the time of the End Triassic is exposed in a former quarry. Reddish sedimentary rocks signaling the extinction itself lie to the far right.
(Image: © Paul Olsen/Lamont-Doherty Earth Observatory)

Massive volcanic eruptions may have led to the extermination of half of Earth's species some 200 million years ago, a new study suggests.

The release of gases from giant eruptions caused climate change that led to the End-Triassic Extinction, the widespread loss of land and sea species that made way for the rise of the dinosaurs, the research says. The new study, published today (March 21) in the journal Science, shows that a set of major eruptions spanning from what is now New Jersey to Morocco occurred very close to the time of the extinction.

Scientists suspected previously that such volcanic activity and the resultant climate change were responsible for this major extinction and at least four others. But researchers weren't able to constrain the dates of the eruptions and extinctions well enough to prove the hypothesis. The new study, however, dates the End-Triassic Extinction to 201.56 million years ago, the same time the volcanoes were blowing their tops.

The eruptions, known as the Central Atlantic Magmatic Province, began when the land on Earth was part of one giant supercontinent called Pangaea. They lasted more than 600,000 years and created a rift that became the Atlantic Ocean. The researchers studied lava from these flows in modern-day Nova Scotia, Morocco and New Jersey. [Big Blasts: History's 10 Most Destructive Volcanoes]

The previous dates for these eruptions had error margins of 1 million to 3 million years, but this study decreases those numbers by an order of magnitude, lead author Terrence Blackburn, a geologist at the Carnegie Institution for Science, told LiveScience.

The results showed that the oldest massive eruptions were in Morocco, followed by the ones in Nova Scotia 3,000 years later and then those in New Jersey another 10,000 years after that. Animal and plant fossils, along with pollen and spores from the Triassic era, can be found in sediment layers underneath the lava flows, but not in layers above them. This suggests the eruptions wiped out those species. The organisms that went extinct include eel-like fish called conodonts, early crocodile species, tree lizards and broad-leaved plants.

The evidence heats up

Blackburn and colleagues determined the age of the lavas based on their mineral content. When lava flows cool, the center regions remain hot, and some chemical elements, like the mineral zircon, fail to crystallize. Zircon incorporates large amounts of uranium, which radioactively decays into lead at a specific rate. By measuring the ratio of uranium to lead in lava rock, the scientists could figure out precisely when the eruptions occurred.

A second piece of evidence supporting the role of volcanism comes from reversals in the Earth's magnetic field. The researchers found mineral grains from one of these reversals in the sediment layer that formed just before the extinction. Since the researchers found the same layers at every site they studied, the magnetic reversal serves as a marker for when the extinction occurred.

A final line of evidence comes from repetitive motions of the Earth. As the planet rotates on its axis, it wobbles around like a top, which causes the amount of energy it receives from the sun to fluctuate depending on the areas that are pointed directly at the sun. These fluctuations correspond to different climate conditions and occur on a regular interval. By using these intervals, the researchers were able to determine the age of fossil-containing sediments to within 20,000 years.

The gigantic eruptions would have vented sulfates that reflected sunlight back into space, effectively cooling the planet for several thousand years. But the eruptions would also have released large amounts of carbon dioxide and other greenhouse gases, causing global warming. Many species wouldn't have been able to survive this dramatic shift in temperature and would have died out.

The findings are "a nice confirmation of what we and others have been aware of for some time," geologist Paul Renne of the Berkeley Geochronology Center in California, who was not involved in the study, told LiveScience. "The main difference is the dating that they used is more precise than our results were."