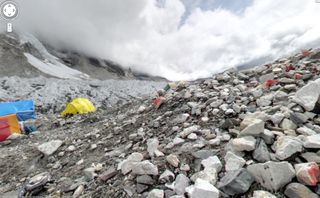 Google Maps unveiled stunning images from the Mt. Everest base camp and three other mountains around the world
(Image: © Google Maps)

Those unwilling to face the altitude sickness, crevasses and avalanches of Mount Everest can still explore the world's highest mountain from home.

Google Maps has unveiled stunning, panoramic imagery from some of the highest, most remote places on Earth, including the 18,192-foot-high (5,545 meters) Mount Everest base camp. (Everest's peak is at an altitude of 29,035 feet, or 8,850 meters)

Previous exploration-themed additions to maps on Google Earth have included views of the topography of the ocean floor and Google street-view looks of the Amazon rainforest.

The new imagery also allows users to climb 19,341 feet (5,895 m) to Mount Kilimanjaro's Uhuru, the highest point in Africa. Mount Kilimanjaro is actually a stratovolcano that formed about a million years ago from layers and layers of volcanic ash, lava, pumice and tephra.

To capture the photos, the team used a lightweight camera and tripod with a fish-eye lens.

In 2011, the Google Maps team spent 12 days, hiked more than 70 miles (113 kilometers) and reached an altitude of 18,192 feet at the Everest base camp. As part of the process, they faced earthquakes, flash floods and mudslides, Sara Pelosi, a manager at the company, wrote on Google's lat-long blog.

The images can be viewed in Google Maps on iPhones or Android phones.