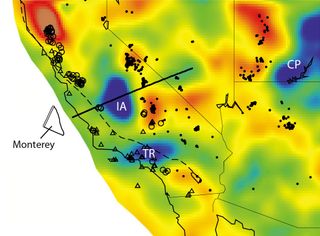 The Isabella anomaly (IA) in California is in line with known remnants of the long-gone Farallon plate.
(Image: © Forsyth lab/Brown University)

A tectonic plate that disappeared under North America millions of years ago still peeks out in central California and Mexico, new research finds.

The Farallon oceanic plate was once nestled between the Pacific and North American plates, which were converging around 200 million years ago at what would become the San Andreas fault along the Pacific coast. This slow geological movement forced the Farallon plate under North America, a process called subduction.

Much of the Farallon plate got pushed down into the mantle, the flowing layer below the Earth's crust. Off the coast, parts of the plate fragmented, leaving some remnants at the surface, stuck to the Pacific plate.

Now, new research published Monday (March 18) in the journal Proceedings of the National Academy of Sciences, finds that these pieces of Farallon plate are attached to much larger chunks at the surface. In fact, part of the Baja region of Mexico and part of central California near the Sierra Nevada mountains sit upon slabs of Farallon plate.

The finding solves a mystery of California geology. Earth scientists use seismic waves (either recorded from earthquakes or created with dynamic charges or other methods) to map out the region beneath the Earth's surface. Softer and hotter materials slow seismic waves down. The waves move faster through stiffer, cooler material.

In California, these seismic surveys revealed a large mass of cool, dry material 62 miles to 124 miles (100 to 200 kilometers) below the surface. This strange spot was dubbed the "Isabella anomaly." [7 Ways the Earth Changes in the Blink of an Eye]

Despite many theories, no one had nailed down exactly what caused the Isabella anomaly. Then researchers discovered another anomaly (where the researchers saw a change in seismic wave speed where one wasn't expected) under the Baja Peninsula, directly east of some of the known remains of the Farallon plate. The proximity led Brown University geophysicists Donald Forsyth and Yun Wang (now at the University of Alaska) to suspect they might be related.

Near the eastern edge of the anomaly, the researchers found volcanic rock deposits called high-magnesium andesites. These are usually linked to the melting of oceanic crust, suggesting that this is the spot where the Farallon plate broke off and subducted, melting into the mantle.

A re-examination of the Isabella anomaly found that it, too, lined up with known Farallon fragments.

"This work has radically changed our understanding of the make-up of the west coast of North America," study co-author Brian Savage of the University of Rhode Island said in a statement. "It will cause a thorough rethinking of the geological history of North America and undoubtedly many other continental margins."

Editor's Note: This article was updated at 10:05 a.m. Eastern time to correct the description of the mantle. This layer is not molten, but is predominantly solid.