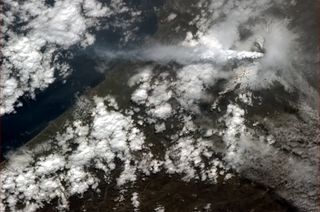 The volcano erupted yesterday (Feb. 27), the latest in a series of strong paroxysms, or short, violent bursts. For the first time, explosions and ash spewed into the air from Mount Etna's Voragine crater, while webcams trained on the fiery summit showed activity at Bocca Nuova crater as well.

Ash cloaks the volcano's snow-covered slopes, but not enough to deter skiers. Small lava flows have also emerged from the most active craters. The volcano has four distinct craters at its summit: two central craters, Bocca Nuova and Voragine; the Northeast crater; and the new Southeast crater.

Hadfield, an astronaut for the Canadian Space Agency, is aboard the International Space Station. He regularly posts amazing images of Earth on his Twitter feed.