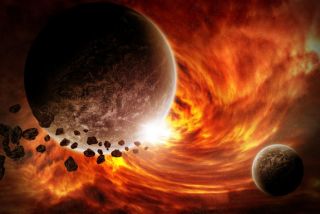 Is the next Pope the last before the apocalypse? Some writings, though discredited, would suggest yes. Regardless of validity, doomsday predictions abound, including end-of-world dates set for 2020, 2040, 2060 and 2080.
(Image: © sdecoret | Shutterstock)

Y2K? A bust. Judgment Day 2011? As quiet as a mouse. The Mayan apocalypse? Certainly not now.

As they have throughout history, failed doomsday predictions come and go. But with the Pope resigning, an asteroid whizzing near the planet Friday (Feb. 15) and a completely unrelated space rock exploding over Russia, it seems a good time to ask: What's next?

Plenty, as it turns out. Previous failures have in no way shut down doomsday predictors, and dates are set for possible apocalypses in 2020, 2040, 2060 and 2080 (zeros have an appeal, apparently). One of these doomsdays was even predicted by Sir Isaac Newton himself.

"It's clear that these kinds of scenarios return over and over and over again," said John Hoopes, an archaeologist at the University of Kansas who has studied doomsday predictions.

The end is nigh

Doomsday prophecies date back thousands of years. The ancient Persians kicked off the hobby of apocalypse predicting in the Western world, Saint Joseph's University professor Allen Kerkeslager told LiveScience in December 2012. When the Zoroastrian Persians conquered the ancient Jews, they passed their end-of-the-world beliefs into Jewish culture, which subsequently handed them to Christianity. Now, everyone from Protestant preachers like Harold Camping, who predicted Armageddon in 2011, to UFO cultists and New Age mystics occasionally jump on the doomsday train.

The most recent apocalypse prediction was tied to the Mayan calendar, even though actual Mayans and scholars who study ancient Maya culture pointed out repeatedly that the calendar was never meant to predict the end of the world. The appointed day (Dec. 21, 2012) came and went without fire and brimstone.

But failures haven't stopped aspiring doomsday prophets in the past. In one of the most notorious apocalypse failures ever, American Baptist preacher William Miller predicted the return of Jesus Christ on March 21, 1844. Nothing happened, so Miller and his followers revised the prediction to Oct. 22. When that day, too, passed without incident, it was dubbed the Great Disappointment. [Oops! 11 Failed Doomsday Predictions]

Likewise, Camping predicted the Rapture three times in 1994 before his 2011 predictions.

So it should come as no surprise that doomsday believers have plenty of dates to fixate on in the future. Friday's ultimately harmless asteroid flyby may trigger more anxiety about world-ending asteroid impacts in the near future, Hoopes told LiveScience. A Friday morning meteor explosion that shattered windows and injured more than 1,000 in Russia is likely to do the same.

In 1595, a Benedictine monk published a series of prophecies he claimed came straight from the pen of a 12th-century archbishop, Saint Malachy. The prophecies are short phrases, each said by future interpreters to match up with a particular pope. For example, the phrase "out of the guardian goose" has been linked to Pope Alexander III (1159-1181), because his family coat of arms sported an image of a goose.

Pope John Paul II (1978-2005) is said to match the 110th phrase on the list, "from the labor of the sun," because he was born and entombed on days when there were solar eclipses. That makes Benedict XVI number 111, "the glory of the olive." A monastic order founded by the saint from whom Benedict took his name has a branch known as the Olivetans, though Benedict himself is not one of them.

Here's where the prophecies — which are completely discredited by the Catholic Church and suspected to be forgeries — get fun. Line 112 reads, "In the extreme persecution of the Holy Roman Church there will sit Peter the Roman, who will nourish the sheep in many tribulations; when they are finished, the city of seven hills will be destroyed and the dreadful judge will judge his people. The end." [End of the World? Top Doomsday Fears]

So is the next Pope the last before the apocalypse? History may not bear out any doomsday predictions, but prognosticators such as Thomas Horn and Cris Putnam, authors of "Petrus Romanus: The Final Pope is Here" (Defender, 2012) certainly think this one has legs. The theory has the advantage of involving the Catholic Church, an institution often accused of conspiracy. Conspiracy theories are often a component of popular doomsday theories, Hoopes said.

Successful predictions have to "hook into some deeper fears," he said.

If the Pope prophecies don't pan out, there's plenty more to see. Numerologists have placed bets on both 2040 and 2080, interpretations that come from the Jewish text the Talmud and the Islamic holy book the Quran.

Psychic Jeane Dixon, who became famous through her newspaper astrology column and who often touted herself as having predicted John F. Kennedy's assassination, claimed that Armageddon would come in 2020. But though Dixon did occasionally make predictions that seemed to pan out, she was frequently wrong, as a 1980 article in the Lakeland Ledger pointed out. For example, Dixon predicted that Fidel Castro's days were numbered in 1968 (Castro is still alive and remained in office until 2011). She also said the two-party system of government would vanish from the United States by 1978, which would come as news to today's Democrats and Republicans.

Dixon, who died in 1997, was so famous that Temple University mathematician John Allen Paulos named the phenomenon of someone advertising correct predictions while ignoring many more failed ones the "Jeane Dixon effect."

But Dixon's fame has nothing on Sir Isaac Newton, the famed mathematician who figured out the principals of gravity. Newton had a side interest in apocalypse speculation, it turns out. A devout Christian, Newton was wary of human fallibility in interpreting prophecies, according to Stephen Snobelen of the University of King's College in Nova Scotia, who has researched Newton's writings. But he did muse in private about the date of doomsday, adding up important Biblical numbers to arrive at 2060.

On the other hand, Newton would not have wanted a reputation as a doomsday predictor, Snobelen wrote in a statement. In his musing on 2060, Newton wrote, "It may end later, but I see no reason for its ending sooner. This I mention not to assert when the time of the end shall be, but to put a stop to the rash conjectures of fanciful men who are frequently predicting the time of the end, & by doing so bring the sacred prophesies into discredit as often as their predictions fail."