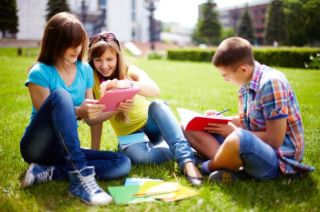 Good grades could be contagious.

Students surrounded by friends who earn better grades than they do tend to see their own grades rise over the next year, according to a new study.

"The smarter that your friends are today, there's a higher chance for you to become smarter as well tomorrow," said study co-author Hiroko Sayama, a systems scientist at the State University of New York in Binghamton.

The findings, which were published online today (Feb. 13) in the journal PLOS ONE, suggest that academic achievement may be influenced by the  performance of your peers.

Sayama was participating in a program called NetSci, which paired high-school students from Maine-Endwell High School in Endwell, N.Y., with his research lab. The students came up with the idea of seeing how social networks affect grades.

Past work had shown that obesity is socially contagious, and people's emotional states also tend to spread through social networks.

To see if a similar trend happened with academic performance, the high schoolers had their 160 fellow classmates fill out a survey listing their best friends, close friends, acquaintances and relatives. They then got a list of each student's class rank from junior to senior year. (All the students were anonymized before their information was used for comparison.)

The high-school students who hung out with less-academic friends tended to see their grades fall over the same period.

Sayama noted, however, that the absolute top students in the class didn't see their grades fall even though their friends inevitably would have lower ranks.

The findings suggest academic performance is a social contagion that travels through friend circles.

Peer groups may subconsciously influence behaviors like study habits, but overt peer pressure also could play a role. If your friend is acing her exams, for instance, you may think, "I need to work harder to keep up with my friends," Sayama told LiveScience.

It's also possible that kids hoping to improve in school choose better students, whom they admire, as friends. So those students' school performance improved due to motivation, not due to their friend circle, he said.

Studying high-school students from their own class "was a very innovative design," said Mark Pachucki, a scientist at the Boston-based Mongan Institute for Health Policy.

But while the team showed that grades are correlated in social networks, "it may be reaching a little bit too far to say that the paper provides evidence of social contagion," said Pachucki, who was not involved in the study.

Friends and acquaintances are connected in many complicated, subtle ways, so the researchers would need to use more sophisticated statistical techniques to rule out othercauses for the effect, such as sharing a new teacher, he said.