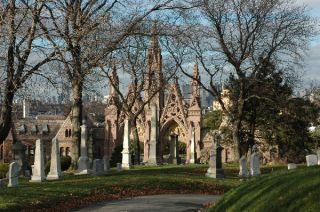 NEW YORK — Society needs to reframe its approach to environmental problems, and the past offers potentially valuable inspiration on how to do this, according to a historian and author. He sees promise in the principles behind the gardenlike cemeteries established in the first half of the 19th century.

"The environmental movement has fed on this sense of panic and fear," said Aaron Sachs, a professor of history at Cornell University. "I realize we are in dire straits. …[But] we've basically been paralyzed for the past 50 years. Why don't we look at the past ways we have interacted with nature that have been more constructive?"

The cemeteries, and the urban parks they inspired, embodied ethics of common ground for people of all walks of life, limitation imposed by death and adaptation to nature. However, he said, these principles were not transmitted to the modern environmental movement, which Sachs described as exalting places inaccurately portrayed as pristine and far removed from people’s daily lives and consumption patterns.

Sachs finds such a precedent in the creation of Mount Auburn Cemetery in Cambridge, Mass., the first garden-style cemetery, founded in 1831. The cemetery, with winding paths that followed the natural contours of the land, offered visitors from all backgrounds respite from a fast-moving society focused on progress. It also reminded them of the natural cycle of life and death and the limits imposed by it, Sachs said at a luncheon here on Tuesday (Feb. 5).

The idea caught on and garden-style cemeteries were established elsewhere, including Green-Wood Cemetery in Brooklyn, and these led to the creation of urban parks, such as Central Park. [The Science of Death: 10 Tales from the Crypt & Beyond]

As an example of the modern rhetoric that Sachs believes sets back the environmental movement, he read from a plea he had received from actor Robert Redford supporting a Natural Resources Defense Council fight against a plan to establish a mine in Alaska's Bristol Bay.

The text of the letter from the moviemaker and environmental activist described the site, saying, "nothing like this place exists anywhere else on Earth" and a "remnant of American wilderness as it used to be," Sachs recalled.

The rhetoric of the letter, which refers to an unspoiled Eden threatened by bad guys, and conveys a sense of urgency, even panic, is common to modern environmental politics, he said.

Sachs has traced these ideas back to a period after garden-style cemeteries became popular, to the establishment in 1864 of what would become Yosemite National Park.

He used Yosemite and, much later, Bristol Bay as examples of a less constructive approach to the natural environment than that embodied by the garden-style cemeteries and urban parks.

Yosemite "immediately became the iconic landscape, the gold standard and because of that, I think places like that have always affected the way we think about environmental politics," said Sachs, who is the author of "Arcadian America: The Death and Life of an Environmental Tradition" (Yale University Press, 2013).

Places like Yosemite and Bristol Bay are portrayed as stunningly beautiful sites people visit temporarily, while on vacation. They are also places of denial, far removed from our daily lives and our patterns of consumption, he said.

They are also falsely perceived as pristine and untouched by humanity. In Yosemite, for example, before being expelled, American Indians had routinely and intentionally set fires that altered the vegetation and created a parklike landscape, he said.

Even within natural parks, truly pristine places no longer exist. But the landscapes of the garden cemeteries and urban parks create space for nature within a designed landscape, Sachs said.

Sachs pointed out that in places like Central Park, people from all walks of life can interact with nature here as part of their daily lives. This is not the case for places like Yosemite and Bristol Bay.

With regard to plans for the mine in Bristol Bay, Sachs said he would ask deeper questions about the reasons for the plan and its implications.

"If we try to save this beautiful pristine wilderness area, and meanwhile continue living the same way we are living, those raw materials at Bristol Bay are just going to be extract somewhere else," he said.