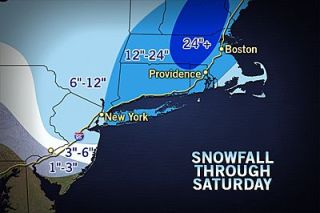 New York City is on the edge of a blizzard that will hit central and coastal New England and Long Island especially hard Friday night.

The storm will bring enough snow to shovel and plow, as well as a period of high winds from central New Jersey to the lower Hudson Valley.

Even though the area from central New Jersey to southeastern New York state may not be in the epicenter of this storm, enough snow will fall to cause major travel problems and winds can be strong enough for a time to cause downed tree limbs, power outages and extensive blowing and drifting of the snow.

As two storms, an Alberta Clipper from the west and a storm from the South, merge there could be more than a manageable amount of snow in New York City, southwestern Connecticut and Long Island.

Without a blocking area of high pressure over the Greenland, this storm will keep moving along.

The heaviest snow is likely Friday evening into the wee hours of Saturday morning around New York City. Over Long Island and western Connecticut heavy snow will last through much of the nighttime hours.

Warm air will be an issue in the New York City metropolitan area and Long Island causing part of the storm to be rain, a wintry mix and some of the snow to melt as it falls on roads during the first part of the storm. However, intense snowfall rates Friday night will overcome this especially east of New York City.

Odds favor wet roads around New York City to a few slippery spots north and west into Friday afternoon. However, as more snow starts to mix in later in the day and a change to all snow is likely by Friday evening, road conditions could rapidly deteriorate.

Low cloud ceilings and increasing winds during Friday may lead to building flight delays and cancellations even before the heavy snow hits.

The strongest winds will be blowing offshore as the storm strengthens. However, there will be minor to moderate coastal flooding problems along the north shore of Long Island with average water levels running 2 to 3 feet above published values. There will be some wave action on top of this of course. Minor coastal flooding is possible for a brief time around Seaside Heights, N.J. Friday evening. In the Raritan Bay area water levels will be between 1 and 2 feet above published values.

The greatest risk of coastal flooding from the storm is along the east coast of New England (from Cape Cod to Boston) Friday night and midday Saturday. The high tide cycle Friday evening is likely to be the most troublesome for northern Long Island. That high tide is within a couple of days of the new moon, which is early Sunday morning.

Across upstate New York and part of southern Ontario, moderate snow will fall from a substantial Alberta Clipper cruising in from the Midwest Friday into Friday night.

Enough snow to shovel and plow is likely over much of this area which can reach as far south as parts of western and northern Pennsylvania into the higher elevations of West Virginia and western Maryland.

A brief shot of blustery, seasonably cold conditions are in store for Saturday in the wake of the storm. Temperatures will moderate Sunday, setting the stage for the next storm system Monday to bring mostly rain to the region with a wintry mix over northern upstate New York and northern New England.

The atmosphere is in the process of building a pipeline of storms for the eastern part of the nation during the balance of February. Most will bring rain to the mid-Atlantic coast, but some could bring snow. Details will follow as the time draws nearer.

Weather vs. Climate Change: Test Yourself