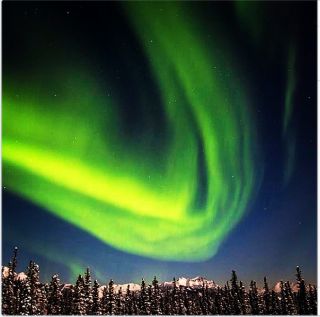 (Image: © U.S. Department of the Interior)

The northern lights recently made an appearance over Alaska's Denali National Park, and as the above photo shows, they did not disappoint.

Northern lights are powerful geomagnetic storms, also known as auroras. They are seen on Earth when charged particles from the sun hit the Earth's atmosphere. The light show was visible across Alaska this past weekend (Jan. 26-27).

Denali covers a whopping 6 million acres of land in the Alaskan wilderness. The landscape ranges from taiga forest to high alpine tundra to snowy mountains. Denali is home to the tallest peak in North America, Mount McKinley, which has a height of 20,320 feet (6,193 meters). The mountain is part of the Alaskan range, which covers some 600 miles (966 kilometers), where "solitude, tranquility and wilderness await," as the park's website says.

Twenty-four-year-old Christopher McCandless was seeking just that when in 1992 he set out on Denali's Stampede Trail. He famously left everything behind, even his name, adopting the trail name of Alexander Supertramp. But his journey was tragic — he died just a few months later of starvation near Denali's Lake Wentitika. The story of his travels was made into the 2007 film "Into The Wild."

This story was peovided by OurAmazingPlanet, sister site to LiveScience. Follow OurAmazingPlanet for the latest in Earth science and exploration news on Twitter @OAPlanet. We're also on Facebook & Google+.