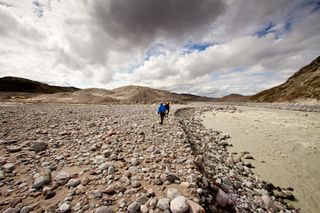 On a warm afternoon, four geologists collect sand on the southwest edge of Greenland, near Kangerlussuaq. The scientists, including Paul Bierman, the expedition leader from the University of Vermont, will use the sand to help answer a pressing question: How fast will Greenland melt as the climate warms?

Though this huge island is mostly covered with an ice sheet thousands of feet thick, nothing frozen is in sight right here. A coffee-colored river sweeps by, and the landscape looks more like a piece of the Utah desert than a polar region north of the Arctic Circle.

But the silt in this river is a clue that, not far from here, the ice sheet remains, melting and pouring down water bound for the sea.

If the whole Greenland ice sheet were to melt, sea level would rise some 23 feet, inundating coastal cities from New York to Dhaka in Bangladesh.

The NSF-funded scientists want to get a clearer picture of how quickly such a melt-off could happen. To forecast the future with greater precision, they look to the past.

Sediment washing off Greenland has sifted down to the ocean bottom and piled up there, in intact layers, for millions of years. In this sediment is an element called beryllium, and in one form of the beryllium hides information about how long Greenland has been covered with ice.

In these ocean-bottom samples, the geology team expects to find evidence of rising and falling levels of beryllium, revealing the growth and retreat of the Greenland ice sheet over millennia.

To make better sense of the ancient ocean sediments, the team also collects sand from today's Greenland. Contemporary beryllium levels and ice coverage serve as an analogy to the past, guiding interpretation of the records drawn from far under the Atlantic Ocean.

Read more about this expedition