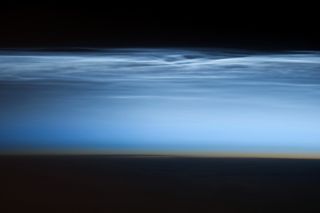 A photograph of night-shining clouds taken with a Nikon D3S digital camera using a 400 millimeter lens by an astronaut aboard the ISS on January 5, 2013.
(Image: © NASA Earth Observatory)

Even when night blankets the land, some clouds high in the atmosphere may still glow, as seen in this photograph taken by a crewmember aboard the International Space Station on Jan. 5, looking down over French Polynesia in the South Pacific.

Known as polar mesospheric or noctilucent clouds, these formations have been spotted from the Northern and Southern Hemispheres on ground, in airplanes and on spacecraft, according to the NASA Earth Observatory.

The clouds, also called "night-shining" clouds, form about 47 to 53 miles (76 to 85 kilometers) above the Earth's surface, according to the Earth Observatory. They form near the boundary between two layers of the atmosphere called the mesosphere and the thermosphere, in a region called the mesopause.

The combination of low temperatures at this height and the cloud's position relative to the sun explains the glowing. At these altitudes, temperatures can drop below minus 200 degrees Fahrenheit (minus 130 degrees Celsius). Any water present in the atmosphere freezes into ice crystals. These sky-high crystals may then be illuminated by the sun, which has set from the point of view of people on the ground but can still backlight the clouds, the Earth Observatory reports.

The clouds are sensitive to changes in the amount of water vapor in the atmosphere, as well as high-altitude temperatures. They may also be getting brighter as a result of climate change, according to a recent study, which suggests that the upper atmosphere is more humid, resulting in more and brighter clouds.

Such clouds are most often seen in the far northern and southern latitudes (above 50 degrees) in the summer when, counter-intuitively, the mesosphere is coldest.

The orange band below the clouds in the astronaut's photo is the atmospheric layer known as the stratosphere, according to the Earth Observatory. Below the stratosphere is the troposphere, the layer of atmosphere nearest the ground, in which the bulk of Earth's weather occurs.