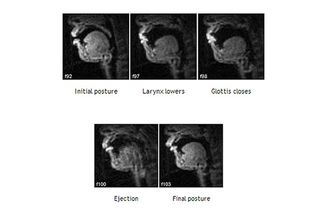 Many of the same mechanisms observed in human speech production were exploited for musical effect, including patterns of articulation that do not occur in the phonologies of the artist's native languages: ejectives, clicks and implosives.
(Image: © USC SPAN Group)

(ISNS) -- Using the mouth, lips, tongue and voice to generate sounds that one might never expect to come from the human body is the specialty of the artists known as beatboxers. Now scientists have used scanners to peer into a beatboxer as he performed his craft to reveal the secrets of this mysterious art.

The human voice has long been used to generate percussion effects in many cultures, including North American scat singing, Celtic lilting and diddling, and Chinese kouji performances. In southern Indian classical music, konnakol is the percussive speech of the solkattu rhythmic form.  In contemporary pop music, the relatively young vocal art form of beatboxing is an element of hip-hop culture.

Until now, the phonetics of these percussion effects were not examined in detail. For instance, it was unknown to what extent beatboxers produced sounds already used within human language.

To learn more about beatboxing, scientists analyzed a 27-year-old male performing in real-time using MRI. This gave researchers "an opportunity to study the sounds people produce in much greater detail than has previously been possible," said Shrikanth Narayanan, a speech and audio engineer at the University of Southern California in Los Angeles. "The overarching goals of our work drive at larger questions related to the nature of sound production and mental processing in human communication, and a study like this is a small part of the larger puzzle."

The investigators made 40 recordings each lasting 20-40 seconds long as the beatboxer produced all the effects in his repertoire, as individual sounds, composite beats, rapped lyrics, sung lyrics and freestyle combinations of these elements. He categorized 17 distinct percussion sounds into five instrumental classes — kick drums, rim shots, snare drums, hi-hats, and cymbals. The artist demonstrated his repertoire at several different tempos, ranging from slower at roughly 88 beats per minute, to faster at 104.

"We were astonished by the complex elegance of the vocal movements and the sounds being created in beatboxing, which in itself is an amazing artistic display," Narayanan said. "This incredible vocal instrument and its many capabilities continue to amaze us, from the intricate choreography of the 'dance of the tongue' to the complex aerodynamics that work together to create a rich tapestry of sounds that encode not only meaning but also a wide range of emotions."

"It is absolutely amazing that a person can make these sounds — that a person has such control over the timing of various parts of the speech apparatus," said phonetician Donna Erickson at the Showa University of Music and Sophia University, both in Japan, who did not participate in this study. "It is very exciting to see how far technology has come — that we can see these movements in real time. It gives us a much better understanding of how the various parts of our speech anatomy work."

The data suggest that "the sounds used by our beatboxing artist mirror those found in the diverse sound systems of the world's many languages," said researcher Michael Proctor, a linguist and speech scientist at the University of Western Sydney in Australia.

The scientists found the beatboxer, a speaker of American English and Panamanian Spanish, was able to generate a wide range of sound effects that do not appear in either of the languages he spoke. Instead, they appeared similar to clicks seen in African languages such as Xhosa from South Africa, Khoekhoe from Botswana, and !Xóõ from Namibia, as well as ejective consonants — bursts of air generated by closing the vocal cords — seen in Nuxálk from British Columbia, Chechen from Chechnya and Hausa from Nigeria and other countries in Africa.

"A key finding of our work is to show that we can describe the basic sounds used by the artist with the same system used to describe speech sounds, which suggests that there is a common inventory of sounds that are drawn upon to create any vocal expression," Proctor said.

The research also sheds light on the human ability to emulate sounds, and on how the human instincts for music and language can overlap and converge. Also, "learning more about beatboxing and other forms of vocal musical expression may offer insights into novel future speech therapy," Narayanan said.

"It would be interesting to see if even more unusual sounds could be both imitated and incorporated," said speech scientist Doug Whalen at Yale University, who did not take part in this research. In addition, "it would be nice to know how the beatboxer came by his inventory, and how long it took him to find the articulations that satisfied him. Were they quickly found? Or quite difficult?"

One goal of future research is to image more of the tongue and palate to provide more details of the mechanics of beatboxing. "It is very humbling to realize that we still don't fully understand some of these fundamental human capabilities," Narayanan said.

In addition, further studies will examine other practitioners of vocal percussion. One goal is to explore how some beatboxers can create the illusion of multiple instruments, or make percussive noises while simultaneously humming or speaking.

Proctor, Narayanan and their colleagues will detail their findings in an upcoming issue of the Journal of the Acoustical Society of America.