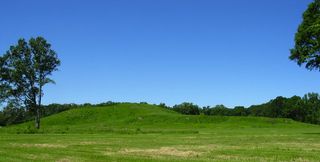 With six vast ridges arcing more than a half-mile, the Poverty Point prehistoric site in Louisiana is one of a kind.

The massive earthworks has now been nominated to become a UNESCO World Heritage Site because of its cultural significance.

World Heritage listing is a prestigious designation that acknowledges the historical, cultural or natural value of a site and signals the U.S. commitment to its long-term protection and management, according to a release from the U.S. Department of the Interior.

Built on a Mississippi River bayou between 1700 B.C. and 1100 B.C., Poverty Point is a giant earthen monument constructed by the local hunter-gatherers of the Poverty Point culture. It consists of six enormous, concentric earthen ridges and several large mounds, including one of the largest in North America. The five aisles and six sections of ridges form a partial octagon, and archeologists think the ridges, once 5 feet (1.5 meters) high, were foundations for dwellings. Scientists are still puzzling out the purpose of the earthworks.

Researchers also still don't understand how the foragers who crafted Poverty Point could totally transform the landscape, according to the site's UNESCO application. Its construction required moving more than 26.5 million cubic feet (750,000 cubic meters) of dirt. While the site has been compared to the amazing temples erected by the slightly younger Olmec and Chavin cultures of Mesoamerica and Peru, both of those cultures were agricultural, with more resources, the application notes.

The Poverty Point landscape was the largest and most elaborate in North America of its time; the particular form of the complex is not duplicated anywhere else in the world, according to the Interior statement.

"Tucked into the bayous of Louisiana, the Poverty Point earthworks are the remarkable legacy of a prehistoric hunter-gatherer society that existed thousands of years ago," Secretary of the Interior Ken Salazar said in the statement. Designation as a World Heritage Site would be not only an honor for both Louisiana and the United States but an invitation to domestic and international travelers, he said.

Artifacts excavated at the site come from as far away as the Ohio and Tennessee river valleys and the Appalachians of Alabama and Georgia, indicating the Poverty Point civilization was heavily involved in trade, the Louisiana Office of Cultural Development's Division of Archaeology notes.

The U.S. has two other nominated sites under consideration by UNESCO: the San Antonio Franciscan Missions in Texas, and 11 buildings by architect Frank Lloyd Wright located throughout the United States.

There are 21 World Heritage Sites in the United States, ranging from historic sites such as Independence Hall in Philadelphia to spectacular natural parks such as the Grand Canyon. Poverty Point would join another earthworks, the Cahokia Mounds State Historic Site in Illinois.