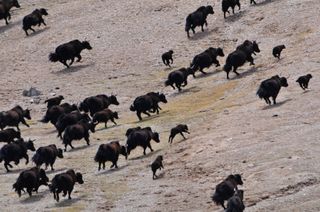 Yaks are coming back. At least they are in a remote reserve on the Tibetan Plateau.

Researchers recently counted nearly 1,000 wild yaks in a rugged northern area of the plateau known as Hoh Xil, which is nearly the size of West Virginia and has very few human residents, according to the Wildlife Conservation Society, which helped conduct the census.

Decimated by hunters in the middle of the 20th century, wild yaks are listed as "vulnerable" by the International Union for the Conservation of Nature, which is one step above "endangered." The animals once ranged in huge numbers throughout Tibet, Nepal, India and western China. Now the population across their entire range may be about 10,000, although the IUCN said this is only a rough estimate in the absence of solid numbers. The animal is protected in several areas throughout its range, such as in Hoh Xil.

The yak is the third largest beast in Asia, after the elephant and rhino, but due to its remote location has never been officially weighed. Yaks live in alpine tundra, grasslands and the cold desert regions of the northern Tibetan Plateau, ranging from 13,000 to 20,000 feet (4,000 to 6,100 meters) in elevation, according to the IUCN.

"Wild yaks are icons for the remote, untamed, high-elevation roof of the world," researcher Joel Berger, who led the yak-counting expedition, said in a statement.  "While polar bears represent a sad disclaimer for a warming Arctic, the recent count of almost 1,000 wild yaks offers hope for the persistence of free-roaming large animals at the virtual limits of high-altitude wildlife."

Berger and his team found more wild yaks near glaciers, which feed adjacent alpine meadows and provide food for the large beasts, the WCS noted. Less than 1 percent of the yaks varied in color from the rest, suggesting they aren't mixing and hybridizing with domestic yaks, as is often the case in more populated areas of Tibet, according to the release.

Very little is known about wild yak biology, such as how often the animals breed and how many young yaks survive to adulthood.