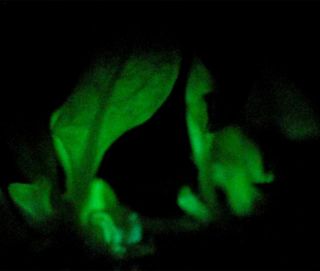 Genetic research on tobacco plants has yielded varieties that glow in the dark and others that grow nonstop.
(Image: © BioGlow, Inc.)

Under normal conditions, the tobacco plant has a rather uninspiring lifespan. They grow for three or four months, according to Investor's Business Daily, reaching 6.5 feet (2 meters) in height at the most, while their older leaves turn yellow and fall off. After flowering, the plants die.

But researchers at the Fraunhofer Institute for Molecular Biology and Applied Ecology (IME) in Münster, Germany, have isolated the genetic switch that tells the tobacco plant to stop growing, flower and die. By suppressing that gene, the scientists have tricked the plants into growing like Jack's beanstalk — even the older leaves stay green and healthy.

"The first of our tobacco plants is now almost eight years old but it still just keeps on growing and growing,” Dirk Prüfer, a professor at the Department of Functional and Applied Genomics at IME, said in a statement. "Although we regularly cut it, it's six-and-a-half meters [21 ft.] tall."

Genetic research on plants has also produced a variety of switchgrass (an important source of biofuels) that grows faster and produces thicker roots. By switching off a gene called UPBEAT1, the switchgrass never receives a signal to stop growing, leading scientists to believe they can use the modified plant to create a higher-yielding biofuel crop.

In other tobacco research, the plants have been genetically engineered to glow in the dark: By inserting a gene from bioluminescent marine bacteria, researchers at BioGlow, Inc., developed a tobacco plant with faintly glowing green leaves.

The scientists at IME hope to use their genetic engineering technique to create larger, longer-lived food plants. They are currently working with a Japanese company to develop a potato plant that possesses the same robust growth as their giant tobacco plant.