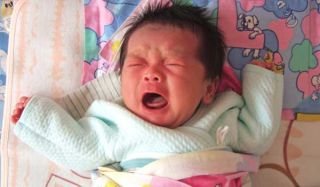 Although doctors say babies should not watch television, some mothers may use the tube as a way to calm fussy infants, a new study suggests.

The results show that infants who were perceived as more active — for example, they squirmed a lot — or fussier by their mothers were exposed to more TV each day compared with infants who were seen as less active or less fussy.

Infants were especially likely to watch more TV if their mothers were obese or did not graduate from high school. Both factors are associated with more TV viewing.

Previous studies have found that infants with tempers are at greater risk for obesity later in childhood, and the new study offers a possible reason why. "Mothers use the TV to soothe and/or entertain them," the researchers wrote in the Jan. 7 issue of the journal Pediatrics.

Excess TV viewing early in life is a concern because the habit has been linked to weight problems and developmental delays in preschool kids, the researchers said. In addition, the TV viewing habits of young children appear to continue into later childhood and the teen years.

The study included only low-income black mothers, and their infants watched more TV on average than infants enrolled in previous studies, so the results may not be true of the population as a whole, the researchers said.

The findings suggest that one way to reduce TV exposure early in life is to give parents alternative strategies to help them calm fussy infants, said the researchers, from the University of North Carolina at Chapel Hill.

The American Academy of Pediatrics discourages TV watching in children younger than 2, citing evidence that it does not provide an educational benefit, and may have adverse health effects.

The new study included 217 black mothers and their infants living in North Carolina. The mothers were visited in their homes when their children were 3 months old, and both the moms and babies were followed until the children were 18 months of age.

Mothers were asked how many hours their child spent in front of the TV when it was turned on. They also answered a questionnaire  that gauged each baby's level of fussiness, activity level and duration of crying.

Infants as young as 3 months watched an average of 2.6 hours of TV a day. By age 1, nearly 40 percent of the babies were watching more than three hours of television a day, the researchers said.

Three-month-olds who watched more than three hours of TV daily had higher fussiness scores compared with those who watched less than one hour a day.

Among fussy infants with obese mothers, 37 percent watched more than three hours of TV a day, compared with 19 percent of infants who weren't as fussy and had normal weight mothers.

It's important to note the study only found an association between TV viewing and fussiness. Because many infants in the study were already watching more than two hours of TV at age 3 months, more research is needed to tease out whether parents really do use TV to calm fussy infants, or whether infants fuss because they watch too much TV, the researchers said.

Pass it on: Fussy infants may be at an increased risk for watching too much TV.