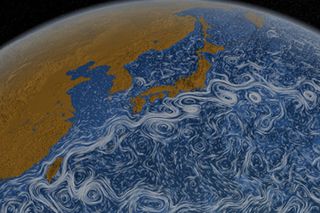 (ISNS) -- One of the biggest effects of climate change has been to alter the chemistry of Earth's oceans: areas with the highest salt content are getting saltier while those with fresher water are getting fresher.

What is causing the change in salinization -- and what, or who, is responsible -- is a problem that researchers are working to solve.

Salinity plays an important part in the circulation of water between the earth's surface and atmosphere, and therefore global weather.

A team from the Scripps Institute of Oceanography in La Jolla, Calif. and, Lawrence Livermore National  Laboratories, using models covering 11,000 years and data from 50 modern years, have concluded that the changes in salinization and temperature must be anthropogenic -- caused by human activity.

"It doesn't correlate with anything else," said David Pierce, one of the investigators. "It is not at all likely it could be [due to] natural cycles."

The nature of the changes depends on where in the oceans scientists look, he said.

"It's varied across the Earth. The Atlantic has been getting saltier while the Pacific, especially the north Pacific and western tropical Pacific, have been getting fresher. The change over the past 50 years has been about 0.2 psu (practical salinity units) which is about 0.5 percent."

The work was published last month in Geophysical Research Letters.

Oceans make up 71 percent of the Earth's surface. The salinity of the oceans is driven by evaporation, rainfall, and the flow of rivers into the sea. This complex mechanism is linked to air and water temperatures.

Natural cycles in the water itself, including El Niño, the Southern Oscillation, and the Pacific Decadal Oscillation, which are patterns of temperature and pressure change that occur regularly in the oceans, also alter the amount of salt in the oceans. But Pierce and his colleagues found that the changes in ocean salinization are independent of those cycles.

The researchers took salinity and temperature records from 1955-2004 which measured the top 2,300 feet in the equatorial and temperate oceans. The data were strongest for the top 82 feet, Pierce said. They then compared what they found to 20 of the newest computer models of the last 11,000 years of climate -- essentially the best estimates of what happened over that time.

"Changes were consistent with those expected from human effects on the climate, which arise primarily from anthropogenically induced changes in greenhouse gases and aerosols," the team wrote. Temperatures showed the same effect, and "an even stronger signature of human forcing on the ocean emerges."

The study of the relationship between climate and oceans is undergoing a bit of a golden age with satellites and floating monitors, part of the Argo project, now scouring the oceans of the world collecting data.

The salinity study is a key piece of that relationship, said Paul Durack at Lawrence, one of the co-authors on the study. It's important because, while we live on only 29 percent of the world's surface, rainfall, drought and temperatures on land are all dependent on the water cycle, and salinity is a part of that cycle.

"If we use models, we understand the relationship between salinity and the water cycle, then we get an understanding of the global system and regional patterns in the future on the land," Durack said.

Also affected is the intensity of storms. Warm air holds more water, and that provides the fuel for storms, said Ray Schmitt, an oceanographer at Woods Hole Oceanographic Institute. That will produce more intense hurricanes and tornadoes, while bringing drought to other parts of the world.

Schmitt, who was not part of the research team, said the only criticism he would make of the paper was that it may have underestimated the effect of human activity.