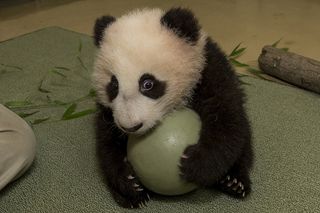 Keepers at the San Diego Zoo have been having a hard time getting panda cub Xiao Liwu to sit still during his regular checkups. But this week they found that, much like a toddler, the fidgety bear calms down when he has a toy to play with.

"His favorite toy today was definitely the ball. He was really enjoying hugging it and rolling on it and doing those kind of rolly, tumbling things that panda cubs are so notoriously cute for doing," Beth Bicknese, a senior veterinarian at the zoo, said in a video statement.

"He's using his mouth right now kind of like a fifth hand," Bicknese added, describing how Xiao Liwu is using his mouth to investigate different textures, from bamboo to the hands of his keepers.

Now 20 weeks old, the panda weighed in at 14.5 pounds (6.5 kilograms) and measured 29 inches (73 centimeters) from nose to tail during his exam Tuesday (Dec. 18), zoo officials said. Keepers are waiting for the cub to become a better follower and stronger climber before they put him out in a public panda exhibit.

Captive breeding is an important way to study and conserve the endangered species, as just 1,600 giant pandas are thought to be left in the wild. In addition to habitat loss from human activities and low reproductive rates, giant pandas' survival is also threatened by climate change. A study released in the journal Nature Climate Change last month found that global warming could wipe out much of the bears' chief food source, bamboo, over the next century.