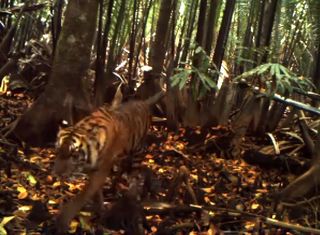 One of the tiger cubs caught on camera.
(Image: © The Zoological Society of London)

A camera trap caught video of a mother tiger and her two cubs in a protected Sumatran forest, the first evidence of breeding in this location, conservationists say.

The footage was captured in Sumatra's Sembilang National Park. Scientists from the Zoological Society of London (ZSL) have documented evidence before of the endangered species in nearby Berbak National Park.

The video of these big cats shows the mother and her two youngsters walking past the camera. Scientists said they estimate the cubs are less than a year old, according to a ZSL release.

"This is the best early Christmas present, and we are absolutely delighted to find the first evidence of breeding in Sembilang," said Sarah Christie, ZSL head of regional conservation programs, in a statement. "We will continue working with leaders of both national parks as well as the government to ensure the areas are better protected and well patrolled."

The finding gives scientists some hope; there are only 300 Sumatran tigers, the smallest of the tiger species, estimated to be in the wild, according to the release. Camera traps have also caught video of tapirs and sunbears in the nearby Berbak forest.

Sembilang and Berbak National Park are some of the only places in the world where these tigers remain, according to the release.