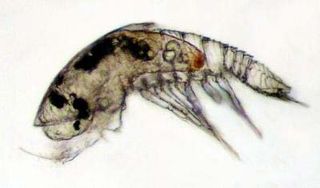 Among the greatest mysteries in zoology for more than a century have been vaguely shrimp-like creatures known as y-larvae.

Although these microscopic beasts are clearly young crustaceans, no one knew what the adult forms looked like.

Now researchers may have solved this puzzle by dosing the y-larvae with a hormone that forced them to go through a growth spurt.

The result — simple, pulsing, slug-like masses of cells that were "mind-blowing" to the scientists. These surprisingly simple creatures — far simpler than their larval stage — may be parasites found worldwide.

Y-larvae, or facetotectans, were first discovered in 1899. There were once x-larvae as well, the 'x' and 'y' both denoting something mysterious. Later on, the adult form of the x-larvae were found, but bafflingly, even after intense searches, no one knew what y-larvae grew up to be, so they kept their name.

These critters are just a few hundred microns large, or roughly the size of the period at the end of this sentence. They occur with dizzying diversity in coral reef areas, and are found in all oceans, from the poles to the tropics. Their commonplace nature suggests the adults play a major role in ecosystems around the globe.

To find out what these y-adults might be, an international team of scientists used nets to collect more than 40 species of y-larvae from a marine station at Sesoko Island near Okinawa, Japan. As they were gathering the creatures, a cyclone approached.

"It was predicted to hit the marine station five days after the arrival of our team," said researcher Henrik Glenner, a molecular biologist at the University of Copenhagen in Denmark. "This put us under substantial time pressure, because we knew that it was impossible to catch the y-larvae after the cyclone had passed. Therefore, we had to work during the nights."

Safe back in the lab

The researchers next exposed y-larvae to a crustacean hormone that encouraged them to mature. The creatures metamorphosized into a juvenile form, dubbed "ypsigons," unexpectedly shedding their exoskeletons to become wriggling, eyeless, limbless creatures that resemble parasitic crustaceans.

At first the researchers thought their eyes were tricking them, but eventually "the juvenile literally crawled out of the old larval carapace," Glenner recalled. "It was only after several repeated experiments we actually believed what we saw. That feeling was a mind-blowing experience."

The fact that ypsigons are vastly different and far simpler than y-larvae might help explain why the adult versions of these creatures have escaped detection for so long. These are so simple compared with y-larvae that they even lack digestive tracts and nervous systems.

Ypsigons could make do without a digestive tract by directly absorbing nutrients from their surroundings, They might develop a nervous system later on in life, "but not necessarily," Glenner said.

"I know it sounds strange, but in some adult parasitic barnacles — rhizocephalans, which parasitize other crustaceans — there are no traces of a nervous system either," Glenner told LiveScience. "This is possible because their behavior as adults is restricted to certain coordinated movements when they release their larvae."

As the final adult stage of the y-larvae are probably parasites, future efforts to uncover these y-adults — to solve this mystery once and for all — will aim to identify their hosts by screening coral reef animals for y-larvae DNA.

"These parasites could play a very important role in the wild," said researcher Jens Høeg, a marine zoologist and invertebrate morphologist at the University of Copenhagen in Denmark. "They should not be seen as evil or bad. Wherever these parasites are, be they in sea urchins or sea stars or corals, they are probably important in making up what we consider a normal, healthy coral reef."

Høeg, Glenner and their colleagues Mark Grygier and Yoshihisa Fujita detailed their findings May 19 in the journal BMC Biology. They were supported by the Carlsberg Foundation in Denmark and the Lake Biwa Museum in Japan.