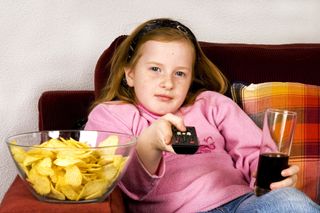 A television in the bedroom raises a child's risk for obesity, a new study suggests.

The study analyzed information on 369 children ages 5 to 18 who underwent body scans to determine the amount of fat mass they had.

Children with a TV in their bedroom were about twice as likely to have high levels of fat mass — defined as levels in the top 25 percent — compared with those without a TV in their room.

Kids with a TV in their room were also more likely to have a large waist circumference measurement and high levels of fat in the bloodstream.

Viewing TV for more than two hours a day was linked to these same risks, the study found. The findings held even after the researchers took into account factors that affect weight, such as age, gender, physical activity level and diet.

About 70 percent of youngsters have a TV in the bedroom, and one-third are overweight or obese, the researchers said.

Previous studies have found a link between bedroom TVs and increased risk of being overweight in children, but these studies have primarily used body mass index (a ratio of height to weight), which is not an exact measurement of body fat.

Watching TV in the bedroom may pose extra hazards compared with regular TV viewing. Studies have linked bedroom TVs with reduced amounts of sleep, a factor that itself has been linked to weight gain, said study researcher Amanda Staiano, of the Pennington Biomedical Research Center in Baton Rouge, La.

The American Academy of Pediatrics recommends children's TV time be limited to two hours a day or less.

The new study will be published in the January issue of the American Journal of Preventive Medicine.

Pass it on: Bedroom TVs may increase the risk of obesity in kids.