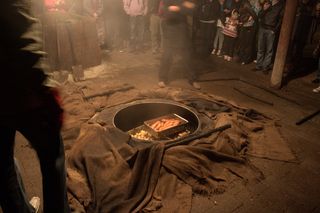 The Maoris ancient cooking stoves, or hangis, may contain rocks that reveal the Earth's past magnetic field
(Image: © RaviGogna | Flickr.com)

Cooking stones from New Zealand could reveal the magnetic history of the Earth going back hundreds of years, new research suggests.

The stones were used by the Maoris, native New Zealanders, in their cooking ovens, called hangis over the past several hundred years. The stones got so hot that the minerals in them with magnetic properties would have aligned with the Earth's magnetic field at the time.

BBC News reported the findings, which were presented Friday (Dec. 7) at the annual meeting of the American Geophysical Union in San Francisco.

"We have very good palaeomagnetic data from across the world recording field strength and direction — especially in the Northern Hemisphere," one of the study authors, Gillian Turner from Victoria University, in New Zealand, told BBC News. "The southwest Pacific is the gap, and in order to complete global models, we're rather desperate for good, high-resolved data from our part of the world."

Earth's magnetic field changes over time, because molten iron in the planet's outer core sloshes around.

Turner is trying to create a record of the Earth's magnetic history over the last 10,000 years. To reconstruct the planet's historic magnetic field, geologists normally look at pottery shards, which contain minerals that demagnetize at high temperatures and then realign with the Earth's magnetic field as they cool. The stronger the field, the more magnetic the minerals, Turner told BBC News.

But the Maoris who first settled in New Zealand around 700 or 800 years ago didn't use pottery. So instead, she decided to look at Maori hangis, which the native islanders have historically used to steam their food.

Legend has it the hangis get white hot, which would mean they reached up to about 2,000 degrees Fahrenheit (1,100 degrees Celsius) – well above the Curie temperature at which minerals demagnetize.

The team experimented with modern-day hangis, heating them and then placing a compass atop them to see how the magnetic field realigned once they cooled. They found the ovens did get hot enough to record the magnetic field.

Now, the researchers are looking for archaeological digs throughout New Zealand that contain traces of old cooking stones.

By testing their magnetic field alignment and using radioactive carbon to date the stones, the team hopes to reconstruct nearly a millennia of the Earth's historical magnetic field in the Southern Hemipshere, where data is more sparse.

To go further back in time, the team will look at other rock sources, such as volcanic rocks from eruptions and lake sediments.