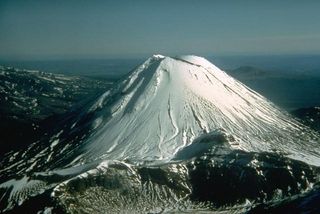 The snow-capped Ngauruhoe cone of New Zealand's Mount Tongariro volcano is one of the youngest and more active parts of the volcano.
(Image: © Don Swanson, 1984 (U.S. Geological Survey))

New Zealand's Mt. Tongariro volcano has erupted causing a widespread ashfall and a potential warning to nearby areas, according to news reports.

Tongariro is located in the central part of the North Island and lies immediately to the northeast of Mount Ruapehu, one of the world's most active volcanoes.

GNS Science, a government-owned company that monitors earthquakes and eruptions, said the new eruption occurred at 11:50 p.m. local time, according to Radio New Zealand News. Some people have reportedly left their houses and others in the region are being advised to stay inside with their doors and windows close, Radio New Zealand reported.

It is being reported that the eruption occurred at the Te Mari Craters, one of numerous vents along the volcano, which is an andesitic complex with more than a dozen cones. Andesite is a black volcanic rock that commonly erupts in thick flows from stratovolcanoes, such as Tongariro, and can create strong, explosive eruptions. If the Te Mari Craters were indeed the source of the eruption, it will be the first one there since 1896, according to records from the Smithsonian's Global Volcanism Program.

Tongariro has been experiencing an uptick in seismic shaking recently and more volcanic gases have been measured coming from its crater, according to Erik Klemetti, author of the Eruptions Blog on Wired.com. Klemetti also reports an ash warning for the volcano, mostly to the east of the site, issued by the Wellington Volcanic Ash Advisory Centre.

This story will be updated as more information becomes available.