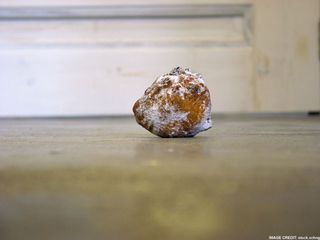 Having an arbitrary rule justifying the consumption of food dropped on the floor within a certain time frame is convenient, especially when said food is a brownie. Unfortunately, tests (and logic) confirm that germs will stick to most foods right on contact.

While a global food crisis sharpens, a new report says a "staggering" amount of food is tossed out as garbage.

More than enough food is produced to feed the world, the report contends. It just doesn't all get where it's needed.

If a significant amount of that food can be saved, then international trade should allow some of it to get in the hands of the hungry, the researchers said today.

"As much as half of the water used to grow food globally may be lost or wasted," said David Molden, director of research at IWMI. "Curbing these losses and improving water productivity provides win-win opportunities for farmers, business, ecosystems and the global hungry. An effective water-saving strategy will first require that minimizing food wastage is placed firmly on the political agenda."

An estimated 1.2 billion people already live in areas where there is not enough water to meet demand, the report states. And rising demand means the problem is getting worse.

"Unless we change our practices, water will be a key constraint to food production in the future," said Pasquale Steduto of the FAO.

In poorer countries, a majority of uneaten food is lost before it has a chance to be consumed. Depending on the crop, an estimated 15-35 percent of food may be lost in the field. Another 10-15 percent is discarded during processing, transport and storage.

In richer countries, production is more efficient but waste is greater: People toss the food they buy and all the resources used to grow, ship and produce the food along with it. And many people overeat, the report notes.

In a recent article by LiveScience, researchers said new technologies can improve food production in the long-term, but the United Nations has made it clear that short-term solutions are needed to prevent unrest and starvation in many parts of the world.

The new report finds opportunities amid the current challenges.

"Improving water productivity and reducing the quantity of food that is wasted can enable us to provide a better diet for the poor and enough food for growing populations," said Jan Lundqvist of SIWI. "Reaching the target we propose, a 50 percent reduction of losses and wastage in the production and consumption chain, is a necessary and achievable goal."

The report is being presented today at a meeting of the United Nations Commission on Sustainable Development.