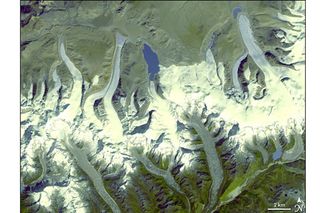 There's bad news for glaciers at the eastern end of the Himalayas: Even if temperatures in the region remain steady for decades, the glaciers of the nation of Bhutan will continue to melt, new research suggests.

All told, Bhutan's glaciers will shrink by about 10 percent and lose about 30 percent of their meltwater even if current temperatures hold over the next few decades, the study found. And if regional temperatures rise just 1.8 degrees Fahrenheit (1 degree Celsius), the glaciers' area could decrease by 25 percent and meltwater could drop off by 65 percent.

The reason is the lag time between changes in the climate and a glacier's response to them, the study researchers say.

"It's a little like saying the glacier has memory," said Summer Rupper, a glaciologist at Brigham Young University who led the study. "Changes in climate alter melt rates, but it takes a long time for those changes to be communicated to the toe of the glacier, where it's actually receding." [The Reality of Climate Change: 10 Myths Busted]

Himalayan glaciers will respond to climate change in a variety of ways, many studies have indicated. Glaciers at the western end of the mountain range seem to be stable, but those toward the eastern end are influenced by the summer monsoon and appear to be retreating, according to a September report by the U.S. National Research Council.

Glaciers in monsoonal areas are commonly found at lower elevations and in higher ambient temperatures, she said. They lose much of their mass by melting rather than through evaporation, wind or other factors.

Most of the glacial melting in these regions happens after snowpack melts in the spring and before the monsoon brings torrential rains in the summer. Typically, glaciers accumulate snow only during the winter, but glaciers in monsoonal regions get snow during the melt season, Rupper said.

"It's odd to look up and see the retreating face of a glacier covered in a dusting of snow, but you get that here," she said.

A hit to water resources

The communities that depend on meltwater from the glaciers stand to feel the biggest impact from a retreat.

Hydroelectric power is Bhutan's largest economic export, and the power plants depend on glacial meltwater. Villages and local agriculture depend on the meltwater, too, though they also receive significant rain from the summer monsoon.

The threat of deadly floods is perhaps even more concerning, Rupper said. One particular danger is glacial lake outbursts. As a glacier rapidly retreats, it drops rocks, dirt and other rubble that can temporarily dam up the meltwater, creating a lake. As water builds up, however, the makeshift dam can break, resulting in massive floods for the communities below. One such flood killed 21 people in 1994.

"As we look at how these glaciers will change," Rupper said, "it's important to keep asking, 'What's the hit to water resources and, by extension, the people who interact with them?'"

Her team's findings were published Oct. 9 in the journal Geophysical Research Letters.