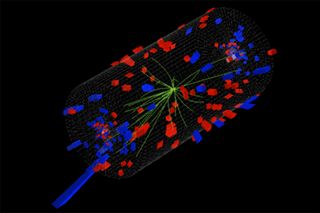 A proton collides with a lead nucleus, sending a shower of particles through the CMS detector.
(Image: © CERN)

Collisions between particles inside the Large Hadron Collider atom smasher have created what looks like a new form of matter.

The new kind of matter is called color-glass condensate, and is a liquidlike wave of gluons, which are elementary particles related to the strong force that sticks quarks together inside protons and neutrons (hence they are like "glue").

Scientists didn't expect this kind of matter wouldresult from the typeof particle collisions going on at the Large Hadron Collider at the time. However, it may explain some odd behavior seen inside the machine, which is a giant loop where particles race around underneath Switzerland and France.

When scientists sped up protons (one of the building blocks of atoms) and lead ions (lead atoms, which contain 82 protons each, stripped of their electrons), and crashed them into each other, the resulting explosions liquefied those particles and gave rise to new particles in their wake. Most of these new particles, as expected, fly off in all directions at close to the speed of light. [Photos: The World's Largest Atom Smasher (LHC)]

But recently scientists noticed that some pairs of particles were flying off from the collision point in correlated directions.

"Somehow they fly at the same direction even though it's not clear how they can communicate their direction with one another. That has surprised many people, including us," MIT physicistGunther Roland, whose group led the analysis of the collision data along with Wei Liof Rice University, said in a statement.

A similar flight pattern is seen when two heavy particles, such as lead and lead, crash into each other. In this case, the collisions create what's called quark-gluon plasma — a superhot soup of particles similar tothe state of the universe just after the Big Bang. This soup can sweep particles in the same direction, explaining why their flight directions wouldbe correlated.

But quark-gluon plasma isn't possible with lead-proton collisions, like the ones in the new study. Now researchers think a different state of matter, the color-glass condensate, may act in a similar way. The color-glass condensate's dense swarm of gluons may also sweep particles off in the same direction, suggested Brookhaven National Laboratory physicistRajuVenugopalan, who first predicted the substance, which may also be seen after proton-proton collisions.

The mechanism may depend on a weird quirk of particles called quantum entanglement. Two particles can be entangled so that they retain a connection even after they are separated, and an action on one reverberates on the other.

Entangled gluons in the color-glass condensate could explain how particles flying away from the collision point might share information about their flight direction with each other, Venugopalan said.

The intriguing phenomenon was not expected to result from the LHC's run of proton-lead collisions, which was meant to serve as a reference point for comparison to other types of collisions.

"You don't expect quark-gluon plasma effects" with lead-proton collisions, Rolandsaid. "It was supposed to be sort of a reference run — a run in which you can study background effects and then subtract them from the effects that you see in lead-lead collisions."

The findings will be detailed in an upcoming issue of the journal Physical Review B.