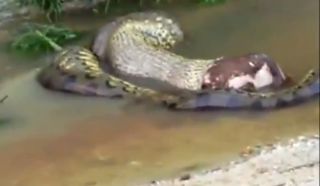 An animal vomited by an anaconda in a YouTube clip is probably a goat, not a cow.
(Image: © Screengrab from YouTube video)

A YouTube video of an anaconda allegedly disgorging a cow became an overnight sensation, but the unlucky animal was probably a much less impressive goat, one expert says.

The video shows an anaconda in the Brazilian Amazon regurgitating the intact carcass of a brown-and-white–spotted mammal, and was originally posted under the title "Giant Anaconda Regurgitates a Whole Cow."

The animal in the video is too small to be anything but a baby cow, though, and is more likely a much smaller mammal — a goat, said Frank Indiviglio, a former herpetologist with the Bronx Zoo who currently writes at ThatReptileBlog. Besides, anacondas can't eat an entire, full-grown cow: the largest animal documented to have been consumed by a constrictor is a 130-pound (59-kilogram) impala, eaten by an African rock python in 1955.

And contrary to some early speculation, the regurgitated animal's coloring doesn't match the brownish gray coat of the capybara, a South American rodent that can grow up to 150 pounds (66 kg), Indiviglio said. [See Video of Snake Regurgitating Goat]

Anacondas live in South America, can grow up to 20 feet (6 meters) long and may weigh up to 330 pounds (150 kg), according to the University of Michigan Museum of Zoology. Though massive, the anaconda has nothing on the largest snake that ever lived, the extinct Titanoboa cerrejonensis, a 45 foot-long (15.2 meter), 2,500 pound (1,135 kg) monster snake that lived about 60 million years ago in modern-day Colombia.

Anacondas aren't picky eaters, strangling and swallowing anything from piglets to other snakes, to 30-pound river turtles, shell and all, he said.

In fact, the mammal shown in the YouTube video may actually be a pretty humdrum meal for the monstrous snake.

"Plenty of people have seen anacondas with horns poking out of [their] skin because they've tried to swallow deer that have antlers," Indiviglio said.

Indiviglio has even seen an anaconda swallow a 5-foot-long Caiman crocodile. "That took the animal all day to kill," Indiviglio said. "They don't suffocate easily, like a mammal."

The vomiting shown in the YouTube video occurs relatively commonly, Indiviglio said. Because their big meals incapacitate them, the snakes sometimes have to vomit in order to escape dangers.

Once the giant constrictors like this anaconda swallow a meal, their internal organs shrink to make room for the huge mass of food, and their powerful digestive enzymes spend weeks breaking down everything but hip bones, hooves and fur.

"After a big meal, they've just got to crawl off, find a sunny warm place and sit there for weeks," he said.

The massive effort of digesting a meal makes the snakes slow and heavy. As a result, at the first hint of danger anacondas regurgitate their meals in order to hide, fight or run.

In fact, the people recording the YouTube video may have prompted the anaconda to vomit up the goat, Indiviglio speculates. The setting shows much less-dense vegetation than is typical in the Amazon jungle, suggesting it lies near a human settlement such as a village.

"People might have pushed [the snake] into view for a better film, might have dragged it by the tail," Indiviglio said. "It probably could have kept that goat down had it not been disturbed."