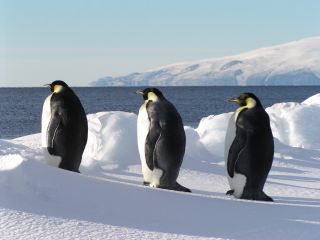 Emperor penguins near the sea in Antarctica.
(Image: © Katsufumi Sato, Atmosphere and Ocean Research Institute, The University of Tokyo.)

Emperor penguins rely on sea ice for breeding and feeding. Shifting patterns of sea ice due to changing climate in the Antarctic could alter the penguin's behavior and ecology, said study author Shinichi Watanabe, an animal ecologist and professor at Fukuyama University in Hiroshima, Japan.

The Antarctic sea ice hit a record maximum this year, but the sea ice distribution around the continent is changing, while the penguins nest in the same place every year.

"If penguins don't stay on the ice during foraging trips, they may not be able to sustain such long trips," Watanabe told OurAmazingPlanet.

March to the sea

The image of thousands of penguins shuffling across the frigid Antarctic ice was immortalized in the film "March of the Penguins." Female emperor penguins trek 30 to 75 miles (50 to 120 kilometers) each way during chick-rearing season to bring back food for their young.

Emperor penguins spend more time foraging than any other penguin species, Watanabe said. "Emperor penguins are a unique ecology, because they are the largest species of penguins and they have the biggest and largest chicks, so they have to bring [a lot of] food," he said. "Also, the distance between the breeding colony and the foraging site is very long, so they need more food."

The ice helps the penguins gorge on food by providing short, safe rest breaks between long dives, Watanabe and his colleagues found. The results, based on 10 penguins from a colony at Cape Washington in the Ross Sea, were published online today (Nov. 21) in the journal PLoS Biology.

The relationship between sea ice conditions and emperor penguins' foraging has been unclear because of the difficulties of tracking the birds at sea, Watanabe said. To figure out how penguins behave once they reach the open ocean, the researchers used special probes that captured motion on land and underwater.

The first thing the animals do after their long walk is rest, the researchers found. After leaving the colony and arriving at the ice edge before the start of a foraging trip, the birds spent 3 hours to 38 hours waiting before making the first dive.

The researchers suspect that the long rests are a result of penguins waiting for others to form a group. Antarctic penguins prefer to dive in flocks, slipping into the water all at once from the ice edge. This could help lower the risk of a seal attack, as leopard seals eagerly await these group dives and there is safety in numbers. However, it's more likely that the phenomenon is simply a result of group behavior, the authors report in the study.

With 24 hours of sunlight, penguins dived continuously through day and night, spending up to two weeks foraging. They relied on the ice for rests between deep dives that lasted up to five hours (with quick breath breaks).