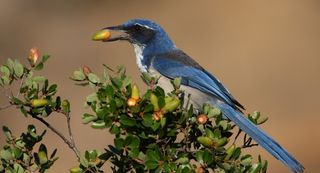 There are far fewer island scrub jays than previously thought, a new calculation of their population size finds. The new count makes them one of the 10 rarest songbirds in the continental United States.

Previous work overestimated their population by fivefold, according to the new study, published in the October issue of the journal Ecological Applications. This overestimate was caused by incomplete sampling, according to a statement from the Smithsonian Conservation Biology Institute, whose scientists co-authored the study.

The striking blue bird lives exclusively on California's Santa Cruz Island. Despite the reduced population estimate, its numbers have grown slowly in the past few decades thanks to the removal of non-native pigs, sheep and cows that destroy the birds' habitat.

The study estimates that there are 2,500 scrub jays living in the wild. The scientists counted jays at more than 300 locations on the island and used a computer model to fill gaps in their data. Using vegetation maps, they found the birds were most prevalent in areas dominated by scrub oak trees.

As a result of this study, the International Union for Conservation of Nature has changed the island scrub jay's status from near-threatened to the higher-risk category of vulnerable, according to the statement. Threats to the bird's small population include restricted island range, lack of genetic diversity,West Nile virus and loss of habitat to oak disease and wildfire.